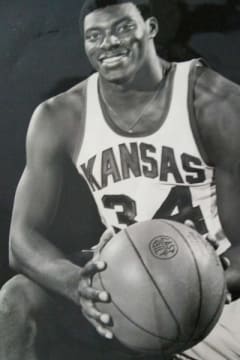 Nino Samuel traveled frequently, due to his father being in the military for over 20 years. He eventually landed in Salina, Kansas, where he played on the basketball team at Salina High School. He quickly became a legend and an opponent to be reckoned with. Nino Samuel was a High School All-American and signed with the University of Kansas, but he eventually transferred to Marymount College in Salina, where he earned his Bachelor of Science in Sociology. He was extremely proud of the fact that he graduated on time, despite his dyslexia. He coached at the high school, AAU, college, and professional levels before earning his personal training certificate in 1996. He worked for the State of Nevada for 10 years, working with mentally and physically disabled kids. He was inducted into the Kansas Basketball Coaches Hall of Fame in 1987 and in the inaugural Salina Central Athletic Hall of Fame, class in 2019.

Nino and Tressie were high school sweethearts. They got married in May of 1972. They were married for 48 years and had two beautiful children, Nino Alphonso Samuel, Jr., and Iris Irene Samuel. They moved to Georgia in 1992. Nino has spent the last 30 years as the owner and CEO of “Nino Samuel Basketball Training” in the metro Atlanta area. Through his laughter, trials, tribulations, and celebration, he always loved his family and made them a priority in his life. Nino Samuel was a loving husband, father, brother, grandfather, and friend. He will be remembered for being larger than life and a kid at heart, despite everything thrown his way. His ability to brighten up someone’s day will always be remembered as one of his greatest assets. He was charismatic and selfless; he had a gift for helping people. He loved basketball and his family, but what really made him flourish and thrive was working with people, especially kids.

He is preceded in death by his mother and father; sister, Sylvia Hoss; and brother, Joseph Samuel.

Professional Services entrusted to Bernard's Family Funeral Care, LLC, The Madison Chapel is honored to have been chosen to serve the family of Mr. Nino Samuel.

Send flowers to the service of Nino Samuel