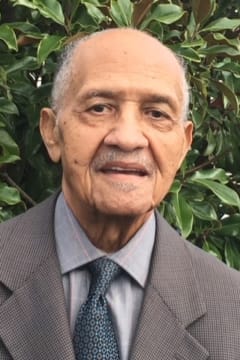 Frank Leroy Thomas transitioned from labor to reward on Saturday, September 4, 2021 in the presence of his family.

At the age of 10, Frank joined Bethel A.M.E. Church. This church had a special place in his heart because his maternal grandparents joined Bethel after slavery. He attended Brooks High School, where he played tackle on two state championship teams coached by the late Mr. Calvin Rutherford. He graduated from high school in 1953. After graduation, he attended Morris Brown College on a full athletic scholarship. He graduated in 1958 with a Bachelor of Science Degree in Social Studies Education. In 1958, he began his teaching career in the Lanier County School System. In 1959, Frank received a teaching position in the Brooks County School System, where he taught for 36 years. He did further study at Albany State, Atlanta University, Valdosta State College and Emory University.

Some have described Frank as friendly, kind, and frank. While others have described him as a Proverbs 4 kind of man---an empathic listener and advisor.

He exhibited those characteristics in every endeavor in which he participated. Known for his storytelling skills and love of history, he stood as a role model for the young men in the community. In 1960, he married Deloris Adams, a fellow teacher. To their union were born two daughters, Valerie Michelle Thomas and Tenjurie Valencia Thomas. While maintaining his membership at Bethel AME Church for more than 78 years, he sang in the Senior Choir, served as a Class Leader, Trustee, Steward, Lay Organization President, Finance Committee Member, and Sons of Allen Member. Further, he tutored in Bethel Community Development Center. He was active in the Thomasville-Bainbridge District and the South Georgia Conference of the AME Church.

He was a member of Phi Beta Sigma Fraternity, Incorporated and a founding member of the Fellows Club.

Send flowers to the service of Frank Thomas

Honor the life of Frank Thomas