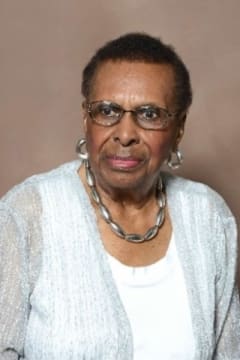 Johnnie Lee Heard Wheeler passed away on Saturday, November 7, 2020 in the home of her daughter, Carolyn Wheeler Maxey, in Mountville PA. She was born in Birmingham, AL , on July 17, 1924, to the late John and Katherine Heard. Johnnie was an active church member her entire life having attended Bethel Baptist, 23rd St. South, Shiloh Baptist, Montevallo Park, and she spent over 40 years at Sixth Ave Baptist Church in Birmingham serving in many ways. Johnnie graduated from A.H. Parker High School, Booker T. Washington Business College and from Birmingham Southern College. She worked for the Birmingham Board of Education and for the Homewood School System, retiring in 1987. In 1944 Johnnie married George Wheeler and they were happily married for 53 years. To this union two daughters were born, Carolyn and Katherine (who died in childhood). Johnnie's husband George preceded her in death in 1997. Johnnie was a member of the Woodland Park Civic League, Club Bridgette and a life member of Delta Sigma Theta Sorority, Inc. She is survived by her daughter, Carolyn Wheeler Maxey, with whom she lived for the past 10 years. Also surviving is her granddaughter, Katherine Maxey Suliveras, wife of Anthony Suliveras, her grandchildren Gabriella, Luca, Zoe and Ezra Suliveras. Also surviving are great-godchildren Armoni, Arreyon and Brijoanna Stewart, all of Lancaster, PA. Three nieces survive in Detroit, MI. They are Barbara Beatty, Pamela Griggs, wife of Greg, and Sharon McRee. Also surviving is cousin Vera Wheeler and family, as well as a host of relatives, friends, and the Sixth Avenue Baptist Church family. The family would like to express sincere gratitude to Gottrel Wallace, Ana Gomez and especially to Christina Ladson for Johnnie's care over the last four years. In lieu of flowers the family would appreciate donations to the Food Bank at Sixth Avenue Baptist Church, 1101 MLK, Jr., Drive, SW, Birmingham, AL 35211. Graveside service for Mrs. Wheeler will be held on Tuesday morning at 11:00 AM in Elmwood Cemetery, 600 MLK Jr. Drive, Birmingham, AL 35211. Family will greet friends at a viewing on Monday, November 23, from 4 – 6 PM at the Bushelon Funeral Home, 800 14th Street SW Birmingham, AL 35211.

Send flowers to the service of Johnnie Wheeler