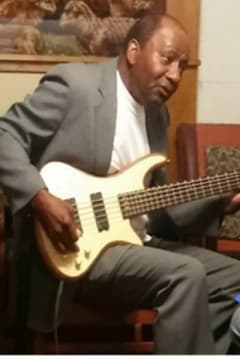 Deacon Eddie Taylor, Jr., quietly transitioned to his heavenly home on July 8, 2020 at Oak Forest Health and Rehabilitation Center in Winston-Salem, North Carolina. Deacon Taylor was born February 29, 1946 to the late Eddie Lee Taylor, Sr. and Bettie Staten Taylor of Sanford, North Carolina. He was the oldest of four children. He graduated from Central Carolina Community College (formerly known as Central Carolina Technical Institute) in 1976 with an Associate’s Degree in Political Science and Law Enforcement.

Deacon Taylor accepted Christ in his life at an early age. He attended Pine Ridge Missionary Baptist Church in Sanford, North Carolina serving as Chairman of the Deacon Board, member of the Finance Department and Janitorial Department. He learned to play the Bass guitar exceptionally well. Deacon Taylor served in the U.S. Army during the Vietnam War as a Telecommunication Specialist. He met his beautiful bride and wife of 51 years, Mary Jane Jones prior to being drafted to the war; they were married shortly thereafter in Bennettsville, South Carolina.

In the late 1960s, Deacon Taylor began his lifetime career with Perry Brothers Tire Service while being enlisted in the U.S. Army. He worked extremely hard earning the manager’s position in the Re-Cap Department for more than 30 years until his retirement in 1999. He then went back to work after one-week’s retirement to working part-time as the Shuttle Transporter for another 20 plus years until health issues intervened. Apart from work, Deacon Taylor enjoyed spending time with his family, church family and members of the community. He loved to go singing with (his Christian quartet group known as) The Heavenly Quintet, fishing with his family, working on the wood yard, site-seeing, shopping, and bowling whenever he had the time. He also spent the last 18 years donating snacks, firewood and other supplies needed for the NC Coastal Pines Girl Scout Troop 513 – Lee County.

Send flowers to the service of Deacon Eddie Taylor Jr.