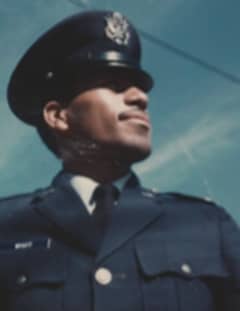 Joseph Elliott Wyatt was born August 12, 1947 in Troy, NC to the late K.T. Joseph and Gracie (Maness) Wyatt. On his first solo flight while attending A&T State University, (A&T Flight School, Greensboro) he chose to fly the Cessna 150 prop plane to Sanford Airport to see his girlfriend, Elizabeth Hooker, who he later married. They were married on March 19, 1969 for over 50 years.

Elliott graduated Valedictorian in 1965 from Pinckney High School. His achievements as a straight A High School Student earned him a full academic scholarship to attend A&T State University.

Upon graduation, he joined the United States Air Force. While serving in the military, he graduated from the Squadron Officers School at Bergstrom AFB, TX and the School of Safety Accident Prevention program in Washington DC. He also attended the Air University at Maxwell AFB, AL and finally the University of Southern California.

Two of the jet planes that he flew were the T38 and the T39; a Sabeliner for 4-Star Generals to travel in. He attained many medals, honors, and awards. His travels has taken him around the world. Thus, he acquired 21 years as an Air Force pilot. He was also ordained as a minister and was a prophet in his home; finally serving as the Principal of Austin Christian Academy.

Preceding him in death were his parents, sisters, Ellen W. McNeill and daughter-in-law, Jamie Wyatt.

Send flowers to the service of Joseph Elliott Wyatt