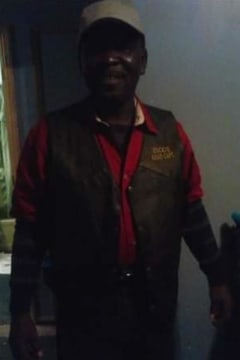 Robert Lee Smith, Jr. was born to Robert Lee Smith, Sr. and Catherine Melvin Smith on August 25, 1961 in Bunnell, FL. He received his education in the Flagler County and Hillsborough County School Systems. He spent most of his childhood in Tampa, Florida with his grandmother Essie Mae Clark before returning to Bunnell, FL in 1978. At age 22, he moved to Lacoochee, FL where he spent about 12 years working and making a life of his own. Robert returned to Bunnell in 1993 and restablished his life, purchased a home and settled. It was 2002 when he married the love of his life Alfreda Brown.

Alfreda Brown – Smith was born to Alonza Brown and Esther B. Jackson on September 18, 1961 in Flagler County. She was the eldest of seven children by her mother, and of twelve children by her father. She was raised in Espanola, FL by a loving family. She received her education at Carver gym, which subsequently integrated to Flagler Palm Coast High. After graduating high school, Alfreda joined the Army. She served as an E-2 nurse, which provided a pathway to her nursing career once being honorably discharged after 8 years of service. Alfreda began employment within the hotel industry, but her passion for nursing was her calling and she later achieved her CNA license. She was a CNA for over 42 years until the day she departed this world. She was a devoted wife, mother, sister, aunt, cousin, and friend. She had a heart of gold and was very compassionate about people. She loved to help others and offer sound advice. Everyone that knew her loved her dearly. In her free time she loved spending time with her husband Robert, whom she affectionately called “Rob.” They enjoyed fishing, listening to music in the house or in the car, visiting the Hard Rock, race track, and Jai-Alai. They loved the Lord and wasn’t afraid of death. They knew their time would one day come, and to our surprise we didn’t know it would be so soon and together. However, it was perfectly fitting seeing they spent their lives together from the sandbox, to high school sweethearts, later separating to explore other ventures only to reunite years later. They were joined in matrimony on April 13, 2002. They enjoyed almost 20 years of marriage and a lifetime together. Their love was the true definition of Til Death Do Us Part - they parted this world together— Now that is love. Robert and Alfreda were preceded in death by both of their parents; son, Paul Edwards; an aunt Hattie Edwards.

Send flowers to the service of Robert Lee Smith Jr.