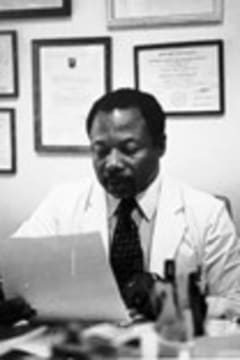 Dr. Dorsett, a heart specialist, died in hospital in Lakeland, FL of complications from COVID-19 flu. May he rest in peace with his wife of nearly 60 years, Geraldine Dorsett (sunrise February 2, 1938 sunset January 23, 2017).

Funeral arrangements will be announced at the proper time in the future, when the present worldwide health crisis has lessened. Until then, family members urge us all to do whatever we can to practice proper social distancing and other methods to fight back against this deadly virus.

Born Rudolph Brian Dorsett to Clara and Anthony Dorsett on April 16, 1935 in the Bahamas.

Rudolph went to school in the Bahamas and attended Central Prep and Western Junior. When it was time for high school he successfully passed the entrance exam and was admitted to St. Johns College. Upon graduation he taught for one year at Western Senior and later worked at the Airport Control Tower for two years.

Rudolph was accepted to Howard University in Washington D.C. There he began studies on his quest to become a medical doctor. While at Howard University he met Geraldine who became his wife and the mother of his six sons, Robert, Brian, Kurt, Emil, Ian and Gregory. Rudolph and his wife Gerry were married for almost sixty (60) years. Dr. Dorsett and his wife moved to Germany where he continued his medical studies while his wife worked as a civilian clerk of the U.S. Army, Dr. Dorsett and his wife were able to travel all over Europe. In 1968 Dr. Dorsett returned to the Bahamas where he established a medical practice. Dr. Dorsett and his family moved to Florida and he established a home in Lakeland and opened medical practices in Winter Haven and Bartow. When Dr. Dorsett and his wife were finally able to retire and enjoy the life they had built, they spent their time traveling between their two homes in Lakeland, Florida and Nassau, Bahamas. Dr. Dorsett was a kind, compassionate and generous husband, father, brother and friend. He loved art, classical music, fishing, hunting, wine (in moderation) and good food (especially the cakes his family in the Bahamas and in Florida would make special for him).

He is predeceased by his wife Geraldine and two of his sons, Robert and Emil, and his brother Chris. He is survived by his daughters Deborah and Stephanie and their beautiful families, his sons Brian and his wife Tracey, Kurt, Ian and Gregory, his sisters Linda, Vanny and Pearly, his large and loving family in the Bahamas, Florida, Pennsylvania and DC (the Graysons, The Joels), his many life long friends (The Jackmans, The Patels) and his many nieces, nephews, grand kids and their families. Dr. Dorsett was well loved and he will be missed. Coney Funeral Home is in charge of arrangements.

Condolences can be sent to the family at ian.dorsett@gmail.com

Send flowers to the service of Rudolph Dorsett