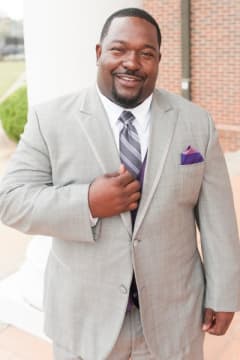 The angels sang on February 23, 1973 when God blessed the lives of Ida Lewis and the late ReLester “Ram” Hunter with a son the world would know as Chris Lamar Lewis. Chris, who was affectionately known by “Grasshopper” and “G-Duck”, was nurtured from early life to his adulthood in Wadley, Georgia. He was educated in the Jefferson County School System and was a stellar athlete known for miles around. “Grasshopper” was no stranger to hardwork and held several jobs throughout his life that included American Steel and the former Delilah Manufacturing. He ultimately made trucking his lifelong career, where he spent over 20 years in the industry, most notably at Crider Foods and finally at George H. Ratchford, Inc. He was a member of Brinson Hill Missionary Baptist Church from an early age and an AVID University of Georgia football fan (GO DAWGS!) “G-Duck” was always the life of the party and was known for his laughter and great sense of humor. He was united in holy matrimony to the love of his life, Rashonda Bostic Lewis on October 15, 2016 and leaves a wealth of memories that will be cherished. He took his eternal journey to be with our Lord and Savior on Wednesday, September 16, 2020. Chris will be forever remembered by the lives he touched. He leaves to treasure his unforgettable spirit; his loving wife, Rashonda Lewis, Wadley, GA; his adoring mother, Ida Lewis, Wadley, GA; his loving daughters, Kenwana Greene (fiancé, Clint Marshall), Macon, GA; Keyanna Jackson, Wadley, GA and Kierra (Austin) Bailey, Savannah, GA; his sons, Dexter Walker, Atlanta, GA and Jarvis Cook, Waynesboro, GA; one doting sister, Alice (Charles) Lewis, Wadley, GA; his brother-in-law, Rodney Bostic, Charlotte, NC; a faithful mother-in-law, Gail Bostic, Augusta, GA; two nieces, Shanice Lewis and Tanekque Lewis, both of Louisville, GA; three grandchildren and a host of aunts, uncles, cousins and friends. Graveside Services will be held Saturday, September 26, 2020 at 2:00 P.M. at Brinson Hill Missionary Baptist Church Cemetery.

Send flowers to the service of Chris Lamar "Grasshopper" Lewis