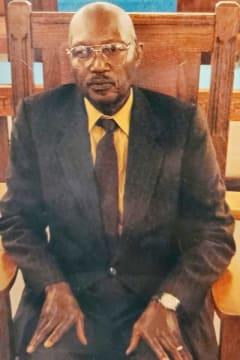 Graveside services will be held Thursday, September 17, 2020 at 2:00 P.M. at Pineola Church of God in Christ, Wadley, GA with mask and social distancing.

Vander Wellons was born in Clayton, North Carolina the third child to the parentage of the late Vander Wellons, Sr. and Isabella Wellons.

Van was educated in the public schools of Clayton, North Carolina. Later in life, he moved to Brooklyn, N.Y. where he met his future wife Adele Fann at a bus station. They dated, got married, and began to build their future.

Van enrolled in the Fashion Institute of Technology where he earned a certificate, designed a few outfits and decided he wanted to do something else so he then enrolled in barbering school he received a certificate to cut hair which he did until he went to school to become a mechanic. He even opened up a couple of variety stores in Brooklyn. He wanted a piece of the pie in this great land of milk and honey.

He kept searching until he found and joined the Murphy Temple in Brooklyn, N.Y. where he got saved and received the Holy ghost. He was a faithful servant and they made him a deacon. In 1991 Van retired from Car dealership moved with Adele to Wadley, Ga. Van got a job at the Jefferson County Board of Education. Van joined the Pineola Church of God and became a deacon. He was a faithful member at Pineola that read his bible every day until God said “well done thou good and faithful servant”.

Send flowers to the service of Vander Wellons