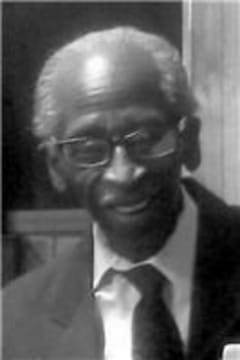 Afuneral ceremony for Pastor George Louis Lauderdale 69, of Anniston, Alabama will be held at 1:00 PM on Friday, December 3, 2021 at the St. John Baptist Church, Sylacauga, Alabama with Pastor Henry A. Sterling, Eulogist.

Burial will follow immediately after service at Sylacauga Cemetery. Public viewing will be held from 1-5 PM on December 2, 2021 at the chapel of Goodson Funeral Home. George Louis Lauderdale began to walk this journey we call life on August 14, 1952 to the union of William Herman Lauderdale and Mera Burney Lauderdale. George attended East Highland High School from elementary through 11th grade when the school was merged with the Sylacauga High School. While at East Highland, he was part of the track team and a member of the marching band, where he became drum major and to this day is remembered for his aerobatics in that role. He graduated from Sylacauga High School in 1971. He joined Mt. Zion Baptist Church at age 14 and served for many years in various roles. He had a passion for singing and was a member of the choir from his youth through young adulthood.

He was ordained as a minister under the pastorate of Reverend R.L. McKinney and was called into service as pastor of the Friendship Baptist Church in Talladega Springs in 1978. He served Friendship Baptist until 1985 when he accepted the position of pastor of the Oak Ridge Baptist Church in Hobson City, Alabama. He served there until 1992 when he founded New Immanuel Baptist Church, where he served as pastor until his death. He was united in matrimony with Rhoda Hill on May 16, 1981. He was preceded in death by: both parents, William Herman Lauderdale and Mera Burney Lauderdale; two sisters, Bessie Ann McElrath and Annette Kirkland; and one brother, William Lauderdale. He leaves to cherish his memory: his wife of 40 years, Rhoda Lauderdale; his sisters, Eloise Lauderdale and Ethel Chambliss; brothers, Melvin (Sandra) Lauderdale and David Lauderdale; and a host of nieces, nephews, great-nieces and nephews, other loving relatives and friends.

Send flowers to the service of George Lauderdale

Honor the life of George Lauderdale