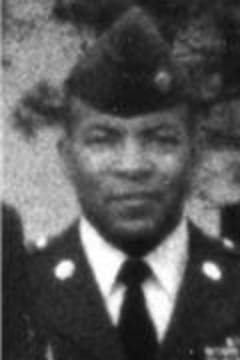 First Sergeant Victor Isaacs, 1SG Isaacs hailed from Magnolia, Mississippi. He attended Mississippi Valley State University and Alcorn State University, where he majored in music performance with an emphasis in Jazz and the trumpet as his major instrument. He studied privately with Dr. Howard Dixon, an alumnus of the Great Count Basie Orchestra, and Gary Ward, trumpet instructor with Washington University at St. Louis, Missouri.

He has also had the honor of performing with Carla Thomas, Freda Payne, and Al Harrington. In May 1973, 1SG Isaacs began his career with the Army. His military education included the Primary Leadership Development Course, the Advanced Non-Commissioned Officer Course, and the First Sergeant Course.

Prior to his final position, 1SG Isaacs served with the 399th Army Band at Ft. Leonard Wood, Missouri, the 84th Army Band in Stuttgart, Germany, the 24th Infantry Division Band at Ft. Stewart, Georgia, and the 25thInfantry Division Band at Schofield Barracks, Hawaii. In addition to bringing peace to our world through music, Victor served the local community through the Church. He started attending the Living By Faith Ministry in 1993, where he became a born-again Christian. He began service at LBFM by blowing the trumpet on the Praise and Worship team. He was ordained an Elder with the laying on of hands by the Presbytery on October 10, 1999 at LBFM by Apostles Maurice Wright and Bob McClain. His Christian example elevated him to the position of Ruling Elder on the Church's Apostolic Council. He was then ordained as Minister of Music and served in that capacity for twenty years. In addition to teaching music to children at church, he tirelessly volunteered his gifts with area charities, including the Anniston Fatherhood Initiative and Habitat for Humanity. Victor's college sweetheart, Zelma Ware Isaacs, preceded him in death on February 13, 2016.

To this union were born a daughter, Angela, a son, Victor, Jr., and a grandson, Victor, III. He had one sister Janie Evans, and many loving nephews, cousins, and friends. One year ago, on June 29, 2019, Victor married Angela Michiko Martin, at the St. James Church of God, in Eatonton, Georgia. On Sunday morning, July 5, 2020, Victor passed peacefully into eternity in the palliative care unit at the University of Alabama Hospital in Birmingham, Alabama. In lieu of flowers, donations may be made to the Martin Foundation in support of stroke research. A graveside celebration will be held Saturday, July 11, 2020, at 3 PM at Forestlawn Gardens.

Goodson Funeral Home is in charge of arrangements.

Send flowers to the service of Victor Isaacs, Sr.