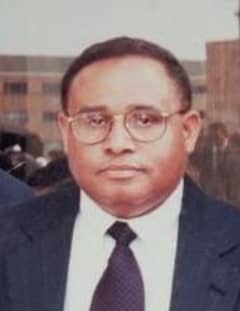 On Monday, December 16, 1946, Charles Louis Johnson and his wife, Sallye Taylor Johnson became parents for the first and only time. Their son, Charles Louis Johnson, II, was born healthy and happy at Dr. Burts family hospital in Clarksville, Tennessee. Charles father was a science educator and researcher in Clarksville. His mother worked in the Clarksville-Montgomery County School System as an administrator, principal, and teacher of language arts (French, English Composition and Literature). The family lived happily together at 26 Current Street at the top of the hill in a small white home with a pear tree in the front yard. Charles was his fathers constant companion. They enjoyed all things outdoors  swimming, fishing, hunting, camping, and photography. During the summer school breaks, the family traveled to colleges and universities all over the United States where Charles father continued his research and teaching. The family went to Howard University (Washington, D.C.), Morehouse College (Atlanta, GA), Tuskegee University (Tuskegee, AL), the University of New Hampshire (Durham), the University of Colorado (Boulder), and the University of Alaska (Anchorage), among others. While in Alaska in the summer of 1957, Charles father died of a heart attack. Charles mother, Sallye, with help from her then-living sisters: Josie, Lucia, Viola, Eddye, and Johnnye, raised Charles as a single mother. Charles attended Burt High School where he played football, baseball, and ran track. He graduated with high honors in 1964. Charles attended Fisk University in Nashville, Tennessee. While at Fisk, Charles pledged Alpha Phi Alpha Fraternity, Inc. and met his future wife, Beverly Lois Floyd of Birmingham, Alabama. He graduated in class of 1968 from Fisk with a degree in Physics. In December 22, 1970, Charles married Beverly in Birmingham, Alabama. The couple moved to Oak Ridge, Tennessee, where Charles began his career at the Oak Ridge Gaseous Diffusion Plant (now Oak Ridge National Laboratories) working with other scientists on enriched Uranium-235 projects for the Department of Defense and the Department of Energy. On April 2, 1972, Charles and Beverly became parents for the first time, welcoming their son, Juan Christopher, into the world. In the fall of 1973, Charles left Oak Ridge to enroll at the University of Tennessee at Knoxvilles College of Law. Charles graduated in 1976 and became a member of the Tennessee Bar. The family moved to Nashville, Tennessee. In Nashville, the family welcomed their second son, Mario Charles, on May 1, 1978. In the summer of 1979, the family moved to Clarksville, Tennessee where Charles began his criminal law practice as an Assistant District Attorney in the 19th Judicial District. Charles enjoyed returning to Clarksville and to his mother with whom he remained very close until her death on December 20, 1992. In the mid-Eighties, Charles began his own criminal defense practice in an office building he purchased in downtown Clarksville. He remained in private practice for several years until he returned to prosecution work in the States Attorneys Office, founding the Domestic Violence Program. He remained there until his retirement in June 2012. Upon retirement he moved to Atlanta, Georgia to be closer to his sons, the pride of his life. Charles died of natural causes in the arms of his sons on Sunday, Fathers Day, June 21, 2015.2015. Grissom-Clark Funeral Home www.grissom-clarkfh.com 404-373-3191