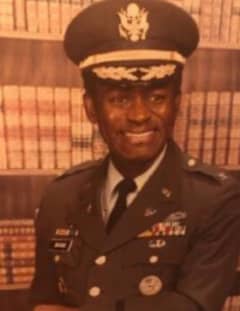 Colonel Bobby Lee Moore, age 83, of Stone Mountain, died January 25, 2019. He is the husband of Colonel Geraldine Moore. In lieu of flowers, the family asks that donations be made to The Atlanta Public Schools Retired ROTC instructors Scholarship which is given annually to an APS JROTC student. For additional scholarship information call 770-402-3715. Alpha Phi Alpha Fraternity, Inc Omega service will be held at 11:30am Saturday, February 9, 2019 at Victory for the World Church 1170 N. Hairston Road Stone Mountain, GA 30083 Visitation will follow at 12:00 noon before service. Celebration of Life will follow at 1:00pm. COL Bobby Lee Moore came into this world with one mission – to serve. He was born to the late Eula Matthews on Thursday, May 09, 1935 in Winston-Salem, NC. A true renaissance man wears many hats, and that is exactly what COL Bobby L Moore did. He fell in love three times: once with his country, again with the professional and academic development of young men and women, and finally with his wife of 31 years. As a beloved husband, son, brother, father, grandfather, great grandfather and leader – COL Bobby Lee Moore lived a full and rewarding life until his passing on January 25, 2019. He attended North Carolina A&T State University (NCA&TSU). He was a member of student government, Alpha Phi Alpha Fraternity, Inc, and the Senior Reserve Officer Training Corps (ROTC). He graduated Magna Cum Laude with a Bachelor of Arts in English in 1958. He was commission as a 2nd Lieutenant in the US Army. His leadership skills were instantly recognized, and he quickly rose through the ranks with his final promotion of Colonel. His active duty career extended over 25 years of exemplary service. He served tours in Europe, Vietnam, and South Korea. COL Moore served with the 5th Special Forces Group as a Green Beret during the Vietnam War. Upon leaving Vietnam, he was fluent in 2 additional languages: Vietnamese and German. Among his many tours was his five years at the Pentagon in Arlington, VA. In this capacity, he served as the Military Assistant to the Deputy Secretary of Defense, Military Assistant to the Deputy Chief of Staff for Personnel, Department of the Army and as the Executive Officer, and Office of Equal Opportunity Program. He retired from active duty in the US Army in 1981. His numerous and significant military awards include the US Army Combat Infantry Badge, Vietnam Service Medal, Meritorious Service Medal, and Joint Service Commendation Medal. Upon retirement from the Army in 1981, COL Moore continued to serve his country as the Senior Army Instructor at Woodrow Wilson High School in Washington, DC where he applied his vast knowledge and experience to the education and leadership development of high school students. In recognition of his success at Wilson High School, he was recruited and hired by Atlanta Public Schools (APS) to serve as the Director of Army Instruction (DAI) in 1983. He served in this capacity for 20 years. He assumed his duties in a contentious and turbulent time in the city of Atlanta. He quickly and permanently transformed a program in need of leadership, direction, harmony, and professionalism to one of the best in the nation. As the DAI of one of the largest JROTC Programs in the nation with an enrollment of more than 3,000 students in 20 high schools, he was recognized as the foremost DAI in the US Army. During his tenure, more cadets from APS were enrolled in the US Service Academies than from any other JROTC Program. He was selected to serve in an advisory capacity to the US Army Cadet Command and was a charter member of the US Army Cadet Command Curriculum Committee where he contributed to the national certification of the Army JROTC Program. COL Moore made profound, positive, and enduring improvements to the effectiveness of Army JROTC Programs not only in Atlanta, but across the nation. He was a devoted supporter of the local community. He served many years on the Board of Directors of the Atlanta Empty Stocking Fund, as a member of the Atlanta Metropolitan Fire Association, and as a member of the Atlanta Journal-Constitution Honor Teacher Selection Committee. For his service as DAI, COL Moore received the US Army Civilian Service Award. He was also inducted into the NCA&TSU Army ROTC Hall of Fame on March 26, 2004. COL Moore shared his life with his best friend and wife COL Geraldine "Gerri" Moore. Together, they shared a life of love, laughter, and adventure. Their marriage exemplified the US Army Values: Loyalty to one another; Duty to protect one another; Respect of another’s position in life; Selfless Service to one another; Honor for their love of family; Integrity to stand by side and not behind the other; and, Personal Courage to not fight with but for one another to the very end. Yet, his greatest accomplishment and his most cherished honor were being called Dad and Granddad. He was preceded in death by his mother Ms Eula Matthews and siblings Bernard Matthews, Carolyn Milton, Yvonne Moore, and Robert Moore. He is survived by the love of his life, his wife COL Geraldine “Gerri” Moore of Stone Mountain, GA, his son Bobby Lawrence Moore (Sondra) of White Plains, Maryland; daughter Dr. Angela Rice (Kenneth) of Stone Mtn, GA; grand-children Brandon Moore, Brittany Moore, Jennifer Rice, Dora Rice, and Kenneth Daniel Rice; great-grandson Johnathan Wiggins; sisters Ms Shirley Blackburn and Ms Loleana Williams of Winston-Salem, NC; and, a host of nieces and nephews. He was a member of Victory for the World Church of Stone Mtn, GA and Mt Zion Baptist Church of Winston-Salem, NC. During COL Moore’s 40+ years of selfless service made significant and lasting contributions to the professional development and effective performance of countless soldiers and to the education, leadership development, and general well-being of tens of thousands of young Americans. His goal was not to be the best, but to make others better; and, not to simply exist, but to be an active advocate and participant in life. It’s what a true leader does. Well done, Sir!