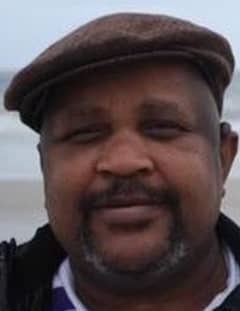 Mr. Deacon Curtis Leroy Jefferies, Sr. was born in Clarendon, Arkansas on Friday, October 14, 1960 to the late Joe Willis and Ollie Pearl Jefferies. He was the baby out of nine children. At an early age, he professed a hope in Christ and joined Philadelphia Baptist Church where he served until moving to Georgia in 1982. He was educated in Clarendons public school system where he was a football and basketball star. He received his high school diploma in 1979. Curtis was a devoted man to all that he touched, even in his work. He worked for Wal-Mart for about five years, Barrows Fabric for nearly six years, a small family business for some time, and was employed at Norcom, Inc. for over twenty years, until his illness struck. He married Alma Jean (Langston) Jefferies on Saturday, October 13, 1984. This union led to four beautiful children. Though he worked very hard to always provide for his family, he never missed a beat. He could be seen on the front row of every awards ceremony, sports event, or other extracurricular event. He was a very family-oriented man. He was truly the glue that kept his family together. Becoming a father was his greatest joy in life. He solidified positive, everlasting bonds with all that he encountered. He could be found wherever there was a need. He was honestly one of the most selfless men known to man. Curtis was a man of God and served the Lord at Love Fellowship Baptist Church as Head Deacon until his death. He became an ordained Deacon in 2002 and was a founding member of Love Fellowship Baptist Church in 1999. Curtis developed an interest in many things in his life, including singing, guitar, listening to music, surfing the web, playing cards, and reading his Bible. He was preceded in death by: one brother, Joe Willis Jefferies, Jr. of Kansas City, MO; one sister, Pearlie Mae Washington, Kansas City, MO. He leaves behind his wife Alma Jefferies of thirty years and four children: Curtis Leroy Jefferies, Jr. (Farah Elizabeth Porter), Brian Kentrell Jefferies, Diamond Lenai Jefferies, and Nicholas Herbert Jefferies. He also leaves behind three brothers; Ivory Jefferies of Stone Mountain, GA; Thomas Jefferies of Kansas City, MO; Larry Jefferies of St. Louis, MO; three sisters, Dorothy Bright of Detroit, MI; April Jefferies of Detroit, MI; Patricia Ann Nelson of Kansas City, MO. He also leaves behind a host of niece, nephews, aunts, uncles, and friends who cherished him dearly.

Send flowers to the service of Curtis Jefferies