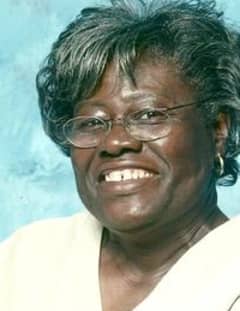 Ella Mae Reams, who was born in Dumas, AR on August 31, 1948 to Geneva Reams and Ester Lee Everhart (who proceeded her in death), was affectionately known as Mama, Ms. Ella and Mother Flagg. As a child she moved to Chicago, IL where her lifes journey would begin. She attended Chicago Public Schools and graduated from DuSable High School. In December of 1969, she married Alton W. Brooks to this union 2 children were born. Ella was an advocate for education and supporting her children; so leading by example she attended Roosevelt University and graduated with a degree in Labor Relations. Ella accepted Christ in her life at an early age and joined with Greater King David MBC under the leadership of the late Elder Anthony N Ratliff. Ella was very active in Choir, Missionary Society, Sunday School, Youth Department and the Pastors Aid. She attended Chicago Baptist Institute where she was certified in Clinical Pastoral Care and Christian Education. Ella started her career with AT &T where she started as a phone operator and was promoted eventually reaching the position of Computer Technician. She served and after 30 years of service she retired. God who directs every path would change her course. Ella later met Willie Flagg, re-married and moved to Atlanta GA. While retired, Ella did not want to just stay home, so she decided to be employed again. She worked for Wal-mart for about 2 years but Ella has always been a teacher at heart. Her love was to see people obtain knowledge and apply it to everyday life. She began teaching for Atlanta Public schools as a substitute. She then decided the best way to mold young minds was to start with the young children. Then she obtained employment at Vision for Souls Day Care where she was a Mother in the church. During that time she received a certification in Early Childhood Development. Also Ella became Assistant at Miles Home Day Care. Ella was a community activist. She was a member for the Austell Community Taskforce known as ACT. She was very instrumental in supporting the communitys needs by pushing paved walkways near the South Cobb Recreational Center, as well as the Back to School Jam which was a book bag giveaway for the children in the neighborhood. It was during that time that she was introduced to Toastmasters. Ms. Ella was a charter member of The South Cobb Toastmaster and later joined Ben Hill Toastmaster. Through out her time with Toastmasters she served in several roles on the Club level as well as the District level. She was very humbled to earn her Distinguished Toastmaster (DTM) and Toastmaster of the Year. She also was active in supporting the bookstore and her love for the bookstore became her passion. Mother Flagg joined Living Water Ministries COGIC in 2006, were she was one of the Church Mothers. She served as President of the mother board until having to be a caregiver for her mother. Mother Flagg will be most remembered for her love for God, the youth and the Pastor. Mother Flagg often stated that she did not want her living to be in vain so she became a living testimony. When diagnosed with cancer she kept fighting knowing that God was her healer. Her life exemplifies her favorite scripture: In all thy ways acknowledge God and he will direct thy path. She leaves to morn a devoted husband, Willie C. Flagg; her daughter, Elizabeth; her son, Alton (Karen) of Chicago IL; her mother, Geneva Charles; four brothers, Darryl W. Charles (Sonya) of Chicago IL, Cecil Everhart (Felicia) of Bellwood IL, Gilbert Hill (Amy) of Houston, TX and Napoleon Everhart of Minnesota; one sister, Tanya Everhart of Chicago; The loves of her life her grandchildren Josephine, Alton W. III, Maurice and Benjamin all of Chicago IL; Mother and Father-in-law, Mr. and Mrs. William Flagg, of Rochester NY; two sisters-in-law, Judith and Shirley Flagg, of Rochester, NY; one brother-in-law, Alphonso Flagg, of Rochester, NY; one uncle, Wesley Stevenson of Corpus Christi, TX; three aunts, Augustine Kersh of Tillar, AR, Catherine Davenport of Detroit, MI, and Veretta Everhart of Los Angeles, CA; a host of nieces and nephews, several adoptive children, and other relatives and many friends.

Send flowers to the service of Ella Brooks Flagg