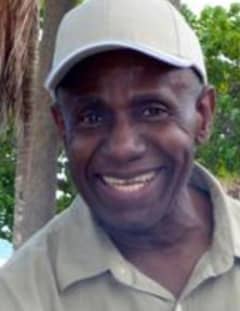 Kenneth H. Rowe was born in the West Indian parish of St. Elizabeth, Jamaica to David and Elfreda Rowe. He was the 7th child in a family of 8. As a youth he attended Brompton Elementary and technical school in Black River. As a teen he worked at Kaiser Bauxite Company in Maggoty and a hotel in Montego Bay. At an early age Ken exhibited traits that would become a trademark of the Rowe Family. A spirit of ambition, entrepreneurship, competitiveness, and a steadfast dedication to hard work. As a young man Kenneth met his future wife Terry Morris, while working for Norwegian Cruise Lines. He was proud of the work he did on Norwegian and would later credit his experiences on the cruise line with contributing to his love of International Cuisine. In the 80s Ken with his wife Terry, and two young girls moved to Coconut Grove, Miami where he established First Gear, the first of many businesses he would own throughout his life: including Steppers, Travellers Restaurants in Miami and Atlanta and a retail store in Ocean Village Shopping Center Ocho Rios, Jamaica. Kenneth Rowe was a charismatic, socially outgoing, energetic individual. He loved heavy weight boxing and would host fight parties at his home for family and friends. Ken loved entertaining family and friends and always made his guests feel welcome. Ken was known for his generosity, aiding several family members in achieving financial independence and obtaining their educational goals. His generosity, however, did not stop there and extended to friends and acquaintances, anyone interested in helping themselves he would do whatever he could to connect people with the resources necessary to obtain employment and further their goals. Even from his hospital bed, Ken would call Terry to make sure his hospital friends were taken care of, catering food for the staff, doctors, and techs on several occasions. Beyond the charisma and generosity he was also a husband and a father first. For 35 years he stood by his wife and children. His grandson Marcus called him Daddy because he treated him like his own child. He was a caretaker, a role model, and a leader for his family and community. He was active in the Jamaican Atlanta Association for years and he and his family attended Hillside Presbyterian Church for the last several years. Ken fought bravely against his health challenges for the past three months and died peacefully in Emory University Hospital on Wednesday, June 5, 2013. Kenneth Rowe would want his family and friends to celebrate his life by living theirs to the fullest and remembering to enjoy the journey along the way. Kenneth Rowe is survived by his beloved wife Terry, his daughters, Kenisha and Teresa; his sons Jason, Kenny and Francis; and one grandson Marcus. We give God thanks for his life and legacy.

Send flowers to the service of Kenneth Henry Rowe