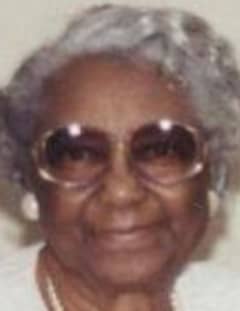 Mrs. Laura Elizabeth Biggs Joyner was born July 27, 1923 to the late Nelson Biggs and Nellie Smith Biggs in Brooklyn, New York. She departed this life Thursday, August 23, 2012 at her home in Lithonia, Georgia.

She was raised in Kinston, North Carolina and attended school at Adkin High and Lenior Community College. She grew up in St. John Baptist Church. Later in life, she met Alonza Joyner. They married and she joined his church, St. James AME Church in Kinston, North Carolina where she was a faithful member. She was the Area Chairperson of the North Eastern District of the Missionary Society; Secretary of the Gospel Choir; served as a Stewardess; served as Queen of the Help in Hand Senior Choir; and was also an officer for Church Women United. She moved to Atlanta, Georgia in November 1987 when her grandson, Ryshawn, was born. She retired in 1989 as a caregiver.

Laura Elizabeth was a member of St. Paul AME Church on Pryor Road in Atlanta. After moving to Lithonia in 1992, she joined St. Paul AME Church on Stone Mountain-Lithonia Road. She joined Saint Philip AME Church Seniors and Retirees and was a very active member until she became ill. She was also a member of the Piney Grove Shining Stars Senior Group. She truly believed in helping people in need  the life of a missionary.

Send flowers to the service of Laura Elizabeth Joyner