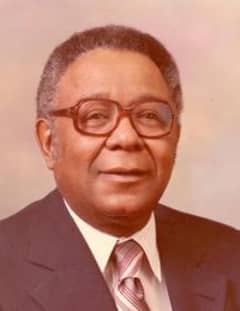 Obituary for Marvin A. Favors

Celebration of life for Mr. Marvin Favors will be Wednesday, December 31, 2014 11:00am at Central United Methodist Church, 501 Mitchell Street, SW, Rev. Yvette D. Massey, Pastor Officiating. Interment, Westview Cemetery. Remains instate 9:30 AM. The family will assemble at the church at 10:30am.

Marvin Favors was born July 31, 1923 in Chipley (Pine Mountain) Georgia, located in Troup County, to Curtis and Mable Favors. He was the eldest of nine (9) children.

On December 26, 2014 he made a peaceful transition from life. He was preceded in death by his wife Lillie Virginia Favors, parents, brothers: Albon (Bud), Ralph (Tommy), Curtis Jr., Willie Joe, and Melvin (Bubba) Favors and sisters: Christine Davidson, Elvira Knight, and Thelma Taylor.

On December 11, 1941 Marvin Favors eloped with Lillie Virginia Copeland and from that union one child, Calvin Favors I, was born.

He began his Christian journey at an early age at Bright Star Baptist Church in Troup County, Georgia. After moving to Atlanta, he joined Mount Moriah Baptist Church and later continued that journey joining his wife of 63 years as a member of Central Methodist Church where he served faithfully, until his health failed, as a member of the Board of Trustees and as Chairman of the Finance Committee.

Upon completing his tour of duty with the Army during WWII in 1947, Marvin and Lillie moved to Atlanta, Georgia where he enrolled in Tailoring School. He began his career with Sam Cohen Tailors and was later employed by Richs Department Store in the tailor shop in downtown Atlanta, becoming the first African American fitter. He noted himself a master salesman and coined the phrase I can sell an eskimo an ice maker! Upon his retirement from Richs, he became manager of Vogue Shoes and President of the Downtown Merchants Association.

Marvin was an active member of the 100% Wrong Club, a lifetime member of the Masons, a founding member of the GGs Social Club and an avid rabbit hunter. His outgoing and assertive personality propelled him to participate in many activities and social clubs.

While Marvin and Lille lived in the Hunter Hills Community, he began his career as an entrepreneur with his partner, Reverend Edward Harris, creating Harris & Favors Builders of Fine Homes. The partnership played an instrumental role in the removal of the barricade, which began the integration of Blacks within the Peyton Forest Community.

Send flowers to the service of Marvin A. Favors