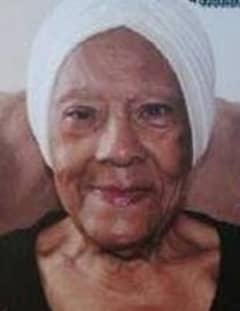 On October 21, 1919, a little girl was born to Horace and Madora Turnage and they called her Ellen L. Turnage. Ellen was loved by all the family and especially her Grandmother, Elizabeth Watkins, with her being the only grandchild . Growing up as a child and young adult Ellen became a great cook like her mother. Later she became a pressing supervisor working at the Calumet Laundry in East Chicago, IN.

There she met her true love Lewis Boyd and they were married on September 9, 1944. This was a happy time for Ellen as a young woman and she met a beloved friend at the laundry that became the sister that she never had, her name was Elizabeth Jones .

Throughout Ellen's life she was always meeting people as an active servant of God. In May of 1967, she became a licensed missionary and an Ordained Mother in August 1982, under the St. Jude National Congress, in Chicago, ll. While serving in His Kingdom throughout the United States, she returned to East Chicago ln., to live and work for the Lord.

Ellen decided to relocate to Atlanta, GA at the age of 81, to be closer to her God-daughters . While residing in Atlanta for the past 12 years, she has continued to be independent and living on her own, she has enjoyed living in the warmer weather, and she continued to worship in severa l churches . She enjoyed the following activities: Gospel concerts, plays, dining out, movies and she was al"\ays ready to laugh and she never met a stranger.

Send flowers to the service of Mother Ellen Turnage Boyd