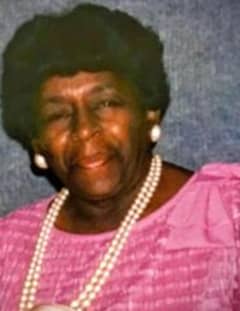 Josie Bell Grissom Allen was born on August 13, 1918, in Fayette County Georgia to the late Jordan T. Grissom and Cora Bivins Grissom. She was the oldest of four children  John F. Grissom, Grace Grissom Kemp and Nancy Grissom Johnson. She made her transition to be with the Lord on April 7, 2016. Mrs. Allen was a devoted, lifetime member of Central and joined at an early age under Rev. J. W. Queen. She was one of the seventeen members at Central known as The Storytellers who came from the old Central Avenue Church on Easter Sunday 1929 to march into their new, state of the art facility. She was very active in the church and remained so throughout her late nineties. As one of the founders of the Bereavement ministry, she not only prepared and served food, she also served as an Ambassador for Central, welcoming and getting to know all who entered its doors. She served as a member of the Wesleyan Service Guild, a member of the D.O.V.E.S., a member of the United Methodist Women where she was responsible for the growth of individuals in the organization and the growth of membership in the organization. She also served as a hall monitor for the Youth Enrichment Program. Prior to worship service beginning each Sunday, Mrs. Allen would arrive at church early to chat with church members and visitors alike. She was truly known for her gift of gab with the youngest Centralite to the oldest. She loved and cared for her church family. In her early years, Mrs. Allen taught in the school district in Temple, Georgia. Later she was employed at OConnors Framing that led to her becoming a connoisseur of beautiful and valued art. She also had a love of gardening which she brought into her home with the beautiful flowers handpicked from her garden. Mrs. Allen was preceded in death by her husband Emmett Allen; granddaughter Emily Josie Allen; brother John Grissom (Helen); sister Grace Kemp (Horace); cousin Darwin Strickland Jr. and nephew George West, Jr. She is survived by her son Wesley Allen (Radiah); one sister Nancy Johnson (Moses); three grandchildren, Imani, Keenan and Emmanuel; nieces, Deborah Hightower (Wilbur); Monique Mabry (Henry); Arrie White (Kenneth); Leonia McRae; Jean Lewis (Rogers); Moy West; Peggy Dorsey; a sister-cousin, Dollie Rozier; nephews, Vernon Johnson (Genny); Michael Grissom (Susan); many great nieces and nephews, cousins, extended family, friends and relative caretakers Lisa Fulton and Ann West.

Send flowers to the service of Mother Josie B. Grissom Allen