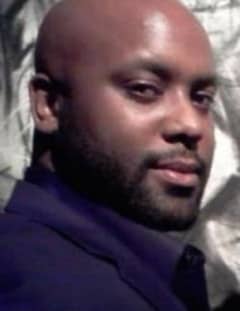 Mr. Andrew L. Ross, Jr. of Conley, GA passed April 28,2015. Funeral Service will be Tuesday May 5,2015 at 1:00pm The Faith Center 4600 North Royal Atlanta Tucker Ga 30084 Grissom-Clark Funeral Home 404-373-3191 www.grissom-clarkfh.com Mr. Andrew Lamar Ross, Jr., was born on July 31, 1984 to the late Mr. Andrew Lamar Ross, Sr. and Mrs. Deborah Ross. He was called from earth to heavens reward on Tuesday, April 28, 2015. Andrew attended McNair High School where he graduated in 2002. Andrew met Carol Alexandra Douglas and immediately became best friends. On December 17, 2005, he was united in holy matrimony to his beloved Carol Alexandra Ross and of that blissful union five children were born-Amari, Amir, Adam, A Nina, and Ava. Andrew was full of life and his main hobby was coaching his childrens team, The Saint Phillips Eagles. His favorite sport was wrestling in which he played during his time at McNair High School. Until his untimely death, he was gainfully employed with Amercico. In 2013, Andrew heeded the call of Christ as his savior. He joined The Faith Center. He is preceded in death by his father, Andrew Lamar Ross Sr., his brother, Jermaine Ross, and his sister, Zanara Ross. Cherishing the legacy of his earthly life are his adored wife Carol Alexandra, children, Amari, Amir, Adam, A Nina, and Ava, his mother Deborah Ross, his brother AJ (Andrea) Ross, his nephew Justin Richardson, and a host of family and friends.