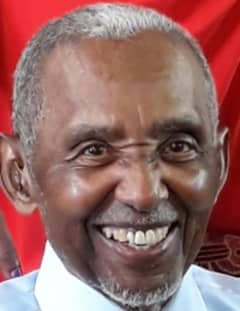 Billy met his first and only love, Gloria Laverne Robinson of Port Arthur, Texas on a blind date. They married in 1953 and spent a cherished 56 years of love together. Gloria was Billy’s soulmate, best friend and greatest champion. He and Gloria were the epitome of God’s unconditional love. They were the proud parents of four children: Billy Jr., Vernon, Cynthia and Bobbi.

Billy was a master of computers. After retiring from the Air Force, he worked at Fairchild Air Force Base (AFB) as a civilian with the title of Computer Operations Chief. He later moved to the Civilian Personnel Office and served as the System Chief and Employee Relations Manager. He retired the second time in January 1995. His interest in computers did not wane after retirement He was a true computer enthusiast and he and friends, George and Don, formed their own geek squad, meeting via computer and phone each night to discuss computer fixes, features, local and national news and whatever else came to their minds.

Throughout his life, Billy was service-oriented and active in the community. During his years in Spokane, he was a member of the Spokane Branch of the N.A.A.C.P., serving as its President for six years. Prior to becoming President he served on various committees as well as serving as Secretary and Vice President. One of his most significant and recognized achievements was proposing a boycott of the local public school system to address the absence of African American teachers and principals; as well as the mistreatment of African American students. This proposed boycott and subsequent letter he pinned (which was published in the Spokesman Review newspaper) served as the catalyst for not only the hiring of additional African American principals, but also the system’s subsequent plan to diversify their workforce.

Billy was an active member of Bethel AME Church in Spokane, Washington where he served in many capacities including Steward, Trustee, Sunday School Superintendent and teacher, Treasurer and he Chair of various committees over the years. He served as Chairman of the Northwest Black Pioneers Committee for a number of years. This committee raised and disbursed scholarships for African American youth in Washington State.

Billy was a dedicated member of the Prince Hall Masons. He came from a long line of Prince Hall Masons and began his Masonic career in May of 1961. Being in the military, he transferred to several lodges. However, after settling in Spokane, Washington he served in many capacities including the Worshipful Master of

Inland Empire Lodge #3 in 1974. As Grand Junior Warden, he organized the Knights of Pythagoras to assist young boys on the path to manhood. Though he served in many positions he ultimately received the 33rd and last degree of masonry and served as Most Worshipful Grand Master of Prince Hall Masons of Washington and its jurisdiction which includes parts of Canada, Guam, the Philippines, Okinawa, Japan, England and Germany from 1985–1988.

Billy was a social justice activist and served as a charter member and first President of the Spokane Chapter of Blacks in Government. He also developed and implemented the first Federal Black Employment Program at Fairchild AFB, which was designed to improve the opportunities for advancement of Blacks in the work force. He served on numerous boards including a stint as the Regional Board member of Region X Blacks in Government; on the Board of Directors of the Spokane OIC; and a Member of the MLK, Jr. Board of Directors. He also served as a member and secretary of the Youth Help Board of Directors, a non-profit organization to help troubled youth. He received many awards, recognitions and newspaper write ups related to his achievements including a Proclamation from the city of Spokane proposing that May 19, 1984 and October 5, 1985 shall both be proclaimed as “Billy V. Morris Appreciation Day.” A proclamation from Tacoma, Washington proclaimed March 28, 1987 as their “Billy V. Morris Appreciation Day.” Additionally, both Billy and Gloria were highlighted for their accomplishments and pioneering spirit in the book, “Images of America – African Americans in Spokane.”

In his words, “of all of my awards, my most treasured is my beautiful wife, Gloria and my four children.” After he and his wife retired, they moved to Stone Mountain, Georgia to be near their children living in Atlanta.

Since relocating to Stone Mountain, Georgia, he joined Saint Philip A.M.E. Church. As an active member of the George Moore-Sarah Allen Usher Board and Senior/Retirees Group, he served as usher board Chaplain and served on various committees within the Seniors/Retirees Group. He was also a part of St. Philip’s Men’s Bible Study Group.

Billy loved life, his family and friends. He initiated the Morris-Drumgould Family Newsletter and loved attending family reunions which continue to this day. Anyone that knew him could not help but notice his infectious smile, affability, and revel in his sense of humor. He and his joking buddy, Johnny “JC” Childs, were always cutting up before, during and after the Seniors and Retirees meetings.