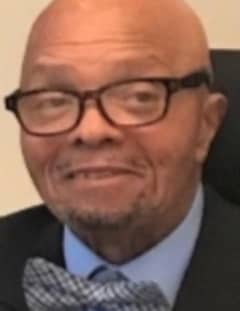 In profound sorrow we announce the passing of Mr. Edward Medows on Wednesday, December 18, 2019. Celebration of Life will be held Friday, December 27, 2019 10:00 am at Dauset Trails Nature Center 360 Mt. Vernon Road Jackson GA. Mr. Edward Medows would like to inform you that his work here is done after receiving an offer from heaven on the early morning of Dec. 18, 2019 that he just could not refuse. It came with a huge sign-on bonus which was joining family & friends that he has not seen in a very long time. There he will do what he loved which is to offer advice, dance, sing along to his favorite Johnny Mathis tunes, eat ice cream and watch even more MSNBC. He took on his first assignment as a bouncing baby boy born to Steve & Marie Meadows on Monday, July 22, 1935 in Atlanta, Georgia; a very proud “Grady Baby.” He joined the team of three older brothers: Steve, Jr., Curtis & Charles. However, the real sibling joy was born 2 years later, his baby sister Annie Pearl. The family had roots in Atlanta, Georgia and Brundidge, Alabama before Ed chose to enlist in the United States Army at a young age where he enjoyed assignments in Greenland & Virginia before settling in New York. He spent 30 years in New York where he and wife Jeanette Shaw Medows were the proud parents of three sons and three daughters. From a young boy, Ed always had a very ambitious and determined spirit which led him to receive his GED, a Bachelor of Science Degree in Accounting from The City College of New York, and a Master’s Degree in Human Resource Management from The New School of New York. He prospered while employed as an IBM executive in Brooklyn, NY and San Antonio, TX where he met his wife of 27 years, Brenda (his Beetle). After retirement, Ed returned to his Georgia roots in 1992 where he enjoyed life in the High Falls Community of Monroe, County. While there he generously gave a year of his life as the volunteer campaign manager for a local attorney running for Superior Court Judge. Ed & Brenda worked tirelessly day and night because they believed Tommy Wilson was the best man for the position of which he still holds today. But Ed did not stop there, he gave his all to see that another local attorney was appointed by the governor to become our Superior Court Judge, William Fears; a position he too still holds today. And the energizer bunny just could not stop while giving even more effort to create the very first Towaliga Drug Court serving the citizens of Butts, Lamar and Monroe Counties. He served as the Drug Court Administrator for five years. Because of Ed’s brilliant planning and solid foundation, the Drug Court under a different leadership now continues its success in making a difference in the lives of hundreds of men, women and their families. The outstanding work of Edward Medows is done here on earth, however his strength and determination of being a 23 year prostate cancer survivor and 9 years of disability after an unsuccessful back surgery, is all a testament to God’s goodness which he professed as a member of the Towaliga Countyline Baptist Church of Jackson, GA where Dr. Eddie Collier is his dedicated pastor.

In Lieu of flowers, donations may be made to: Towaliga Countyline Church Building Fund PO Box 642 Jackson, GA 30233 www.givelify.com

Send flowers to the service of Mr. Edward Medows