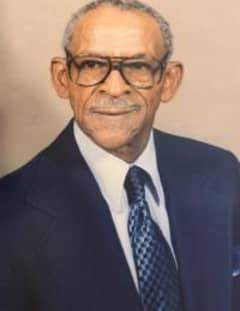 Henry Turner Logan, Sr. was born March 3, 1922 to the late John Wesley and Martha Ann (Grier) Logan; the youngest and last living of twelve children: seven boys and five girls. Henry was a boy scout and attended the Atlanta Public School System, including Wesley Avenue Elementary, David T. Howard, and Booker T. Washington High School, graduating in 1940. He went on to further his education at Clark-Atlanta University (aka Clark College), majoring in Finance and Business Administration before being drafted for service.

Henry Sr. possessed a strong work ethic throughout his career and held several jobs. In his early years, Henry delivered the Atlanta World and Atlanta Constitution newspapers in and around the Old Forth Ward area. His desire to further his knowledge led him to attend Blayton School of Accounting and Carver Tailoring School before becoming employed with The Frito Lay Company, where he worked as a machine operator /fork-lift driver. After more than 40 years of service, he retired in 1986.

Henry Sr. was a member of St. Philip AME Church before joining Liberty Baptist Church in the mid 60's. While at Liberty, he sang in the gospel choir and served as Treasurer for many years. He served faithfully until his eye sight began to fail.

Acknowledgements The family would like to thank everyone for their prayers, expressions of sympathy and all other acts of kindness shown to us during the passing of our father. Your kindness will not be forgotten.

Special Thanks To Devon, Audrey, and AnnMarie, owners and caregivers of Dynamic Personal Care home, for the love, patience and special care that you provided to Mr. Henry throughout the past few years – we are eternally grateful. Although our hearts are heavy, we thank God for allowing dad to stay with us for as long as he did. – The Family

Send flowers to the service of Mr. Henry T. Logan