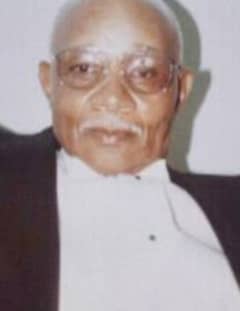 Jasper Brooks Sr. was born February 13, 1928 in Chipley, Georgia to the late Ben and Johnnie Mae Brooks. He was called to serve in Heaven's army on October 25, 2019 while at home in the presence of his family and love ones. Jasper received his education through Meriwether County School System. As a young man, Jasper was a farmer. After retiring from farming, he enlisted in the U.S Army where he served his nation admirably during the Korean War. Having been honorably discharged, he became a truck driver. While driving trucks, he met and later married the love of his life Mrs. Dora Lee Chatmon Brooks. Their union was blessed with nine children. To support his family, Jasper used his entrepreneur skill to start an successful landscaping business later to be passed on to his son Jasper Brooks Jr. Jasper was a wonderful father and servant of his community. He was always willing to extend a helping hand, provide job opportunities and mentor to the upcoming generations. Jasper was referred to as the "Mayor of Kirkwood" due to all his attributes he contributed to the community. Throughout Jasper's life, he was known as quite the outdoorsmen. Where he spent countless trips with his family and friends hunting and fishing. Although Jasper moved to the city, he was still a country man at heart. In his backyard in Kirkwood, you could find horses, hogs, chicken, rosters, hunting dogs and a well kept garden. Jasper was a fighter and throughout his final days fought till the very end. While in his transition, his devoted daughter Crystal Brooks Eubanks, became his caregiver and was by his side taking care of his needs. Jasper was preceded in death by his parents Ben and Johnnie Mae Brooks; wife Dora Brooks (Ms. Sweet); son Jasper Brooks Jr.; Three brothers: Ben Brooks Jr., Jamie Lee Brooks and Welton Brooks; Two sisters Mary Lou Leslie and Charlie Mae Leslie; two grandsons, Xavier Roach and Dontavious Brooks. Jasper leaves to cherish his memories: Ricardo Brooks, Leonardo Brooks, Sims Brooks, Oquita Bulbulia, Cherlyn Roach, Yolanda Brooks, Crystal Brooks Eubanks, and Veleda Brooks; Honorary son Kenneth Atwater;One sister, Cornellia (Good) Culpepper and two sister in laws Jeanette Brooks and Ossia (Shug)Whitehead (Calvin); Twenty-nine grandchildren; forty-one great grandchildren; and a host of other relatives and friends.

Send flowers to the service of Mr. Jasper Brooks