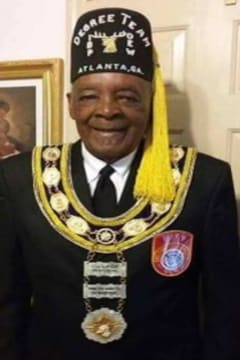 In profound sorrow we announce the passing of Mr. John R. Parkes. Celebration of Life will be Thursday, March 24, 2022 11:00am at Grissom-Clark Eastlake Chapel. Viewing will be Wednesday, March 23, 2022 12noon-6pm at Grissom-Clark Funeral Home. Mr. John Russell Parkes was born September 21, 1936 to the late Minnie Lee Parkes. He was educated in the Atlanta Public School System and graduated from David T. Howard High School in 1955 and later joined the United States Navy. Shortly after, he met and married the late Margarite Parkes, in which a daughter, Patricia Parkes, was born. John was a dedicated member of the Gate City Lodge #54 for sixty-three years and held many positions in the order. He was also a member of Wheat Street Baptist Church where he served on the usher board and sang in the choir. In 1969, he met and married Mrs. Heddy Jackson Parkes and the two built a beautiful life together. They entered into on marriage March 25, 1992. John was a devoted husband, father, grandfather, uncle and friend. John dedicated over seventeen years of his life as an employee at Paschal’s Concession Stands and brought joy to all that were fortunate enough to meet him. On March 11, 2022, Mr. John Russell Parkes went home to rest in the Lord. He was preceded in death by his brother, Victor Parkes, sister, Bell Parkes and daughter, Deborah J. Sharif. He leaves to cherish his memories, a devoted wife, Mrs. Heddy Parkes; two daughters, Patricia Parkes and Sherwonda Mickens; grandchildren, J.B., Warren, Corey, Kyle, McKenzie, Emil, Emmanuel and Cheyenne; brothers-in-law, Perry (Dorothy) Terrell and Willie Evans; nephews, (Danny and Larry); nieces, Kecia and “Favorite Niece” (as he called her), Carmalita Terrell; cousin, Sheila; and a host of other nieces, nephews, great-grandchildren, family members and friends.

Send flowers to the service of Mr. John R. Parkes