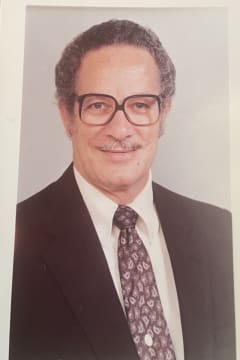 Joseph “Joe” Henry Amos, was born on February 19, 1929, at Grady Hospital in Atlanta, GA. He was the fifth of six children, born to the late Sandy and Beulah Amos. Joe lost his mother and father at a young age. After the loss of both parents, Joe and his siblings were reared by their stepmother, Allene Amos. His sister, Willie Louise, and four brothers: Sandy, Preston (Gene), Nathaniel and Thomas (Tommy), all preceded him in death. Joe attended Ashby Street Elementary School (E.R. Carter) and the historical, Booker T. Washington High School; graduating in 1947. An avid tennis player, Joe played tennis at Atlanta’s first African American park, Washington Park. On January 24, 1952, he married Mary Victoria Talmadge. To this union, two children were born, Audrey Denise and Kenneth Jerome. In 1964, Joe adopted his late sister’s son, Michael. In 1955, Joe began working with the City of Atlanta, as a janitor. In his work, he came in contact with school detectives; which piqued his interest. He took the school detectives exam twice, scoring high marks each time, to no avail. At the suggestion of a school detective, he applied to the Atlanta Police Department. Joe passed the exam and was accepted. In 1957, he was sworn in; becoming only the 28th African American police officer with APD. While in Rookie School, the instructor told him he was wasting his time. He said, “Anyone who can argue as well as you, ought to be in law school.” Joe rose through the ranks at APD. He was promoted to Detective in 1964; Sergeant in 1968, and Lieutenant in 1969. Remembering the suggestion from his instructor, he applied to law school. Joe became the first African American student at Woodrow Wilson Law School, in Atlanta. In 1968, he received his Juris Doctor. Joe sat for the Georgia Bar exam in 1969, and passed on his first attempt. In 1971, he received a one year law scholarship to attend Harvard University School of Law, to study Criminal Justice; however, he was unable to complete his full year of study. In 1972, Chief Herbert Jenkins called him back to Atlanta. Joe, as well as three others were appointed to the newly created position(s) of Assistant Chief. Each of the four were responsible for overseeing different areas of the APD. Of the four appointees, Joe was the only African American; making him the highest ranking African American police officer, in a major Southern city. After years of distinguished service, Joe retired from the Atlanta Police Department in 1986. After retirement, he worked seasonally for tax preparation company, H&R Block. Joe believed that every adult should have a will and discovered that there was a need for more education in estate planning, especially in the African American community. He conducted workshops at: church, funeral homes, and private groups. Over the years, he prepared wills, for many grateful clients. As a longtime member of Central United Methodist Church, Joe served in various capacities, including: Chairman of the Board of Trustees, The Finance Committee, Youth Enrichment Program (YEP), The Book Ministry, and was instrumental in the creation of the Legal Ministry. Joe was a member of Phi Beta Sigma Fraternity, Inc. He enjoyed reading; maintaining a subscription to Consumer Reports and Reader’s Digest. For many years, he could be found enjoying his morning coffee at the kitchen table, while reading the AJC. Joe also enjoyed jazz music, often playing, “Take Five.” Early Thursday morning, April 8th, 2021, Joseph Amos peacefully passed away, with his wife and daughter at his bedside. He leaves to cherish many wonderful memories: devoted wife of 69 years, Mary Victoria Amos; daughter, Audrey Anderson; son, Kenneth Amos (Doris); son/nephew, Michael Amos (Sharon); granddaughters, Tomika Nichols and Brittany Amos; great-grandchildren: Javon Redmond, Sadeja Nichols, Jaden Nichols, Janai Nichols; nieces: Anita Amos, Sandra Smith and Barbara Smith; nephew, Sandy Amos (Cheshta); sisters-in-law, Alcione Amos and Ann Amos; brother-in-law, Matthew Talmadge (Delores); goddaughter, Madeline Elaine Drake; adopted grandchildren, Nathan and Ernest Givens; special friends, Mrs. Leon Wilson, Mrs. Wilhelmina Gideon, Mrs. Sandra McLemore, Mrs. Janie Harris, Ms. Annie Underwood, Mr. Kenneth Rucker, Johnny Sparks (retired APD) and Floyd Reeves (retired APD), extended family and friends. The family of Joseph Amos would like to send its sincerest thanks, for the excellent and loving care shown to Joe-Joe: by Delores (LoLo) Brooks and Jasmine (Jazz) Andrews; also Victoria, Caroline and Chandra, of Golden Rule Hospice and The Atlanta Police Department.

Send flowers to the service of Mr. Joseph Henry Amos