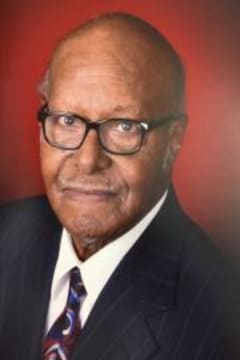 Moses Jerome Johnson was born on August 8, 1925, in Atlanta, Georgia, to the late Moses and Mary Elizabeth Johnson. He was the third child of a loving family of a brother and sister who preceded him in death, James and Mary Elizabeth. Moses went to join his heavenly Father, his parents, siblings and the love of his life, his late wife, Nancy Grissom Johnson, on September 4, 2021. Educated in the Atlanta Public School System, Moses graduated from Booker T. Washington High School where he learned tailoring. He used that skill for the rest of his life as he altered his clothes to make them fit his body, displayed by his cool style and walk. He went on to matriculate at Clark College, but his education was interrupted when he was drafted into the United States Navy in 1943. He completed his basic training in Great Lakes, Illinois; received his chef’s training at Cooks and Bakers school in San Diego, and completed his military service in San Clemente Island, California, honorably discharged on June 8, 1946. Among his many awards was the World War II Victory Medal. Oddly enough, it was in California that he met his future wife, Nancy Reecene Grissom, who also happened to be working in California at the time and who lived only one street parallel to his street back home in Atlanta. After his tour of duty was over, Moses returned to Clark College, class of 1950, to continue his education In October of 1949, Moses married his sweetheart, Nancy, who was also a student at Clark College. Four children were born to this union: Deborah, Monique, Arrie and Vernon. Moses took seriously his responsibility as a husband and a father and made sure that the needs of his family were met. Though he had not had the opportunity to play a musical instrument, he heeded his wife’s desire for their children to be exposed to the arts. So he worked extra jobs to buy a piano on which their children could practice piano lessons assigned by their private tutor and each child owned and played a musical instrument in school – clarinet, violin and bells. Moses was employed by the United States Postal Service (USPS) in 1951 where he was a railway clerk on the mail train and later he worked in supervisory positions for the USPS in metro Atlanta, becoming the first black supervisor at the airmail field. He retired in 1980. Moses joined Central United Methodist Church early in his marriage and served faithfully for many decades. Teaching the Men’s Sunday School class was the highlight of his Sunday. He served on the Staff Parish Relations Committee and was an active member of the United Methodist Men. He enjoyed both of these ministries past the age of 90. Moses’ ability to participate in various activities past the age of 90 is because he walked a mile five days a week until he was 93 years old. Not one to sit around being idle, Moses was an avid golfer who enjoyed weekly rounds of golf with his friends. He served as a Boy Scout leader and received the District Award of Merit in 1980 and the Silver Beaver Award for distinguished service to youth in 1984. He mentored at risk young boys and became a surrogate parent to two students in the Atlanta Public School System. He was a lifelong member of and held offices in the Atlanta Omega Y’s Men and Y’s Men International where he was Y’S Man of the Year in 1979 and served as Regional Director from 1987-1988. As a member of the Metro Atlanta Lion’s Club, in addition to his many offices held and awards received as a Lion, he served as District Chairman in 1977 and received the top recognition of a Lion with the Melvin Jones Fellow award for dedicated humanitarian services. Most weekends one could find him with the Lions during their White Cane Day. Moses would share sage advice or food for thought at family celebrations, such as, “After all is said and done, there is more said than done.” At the conclusion of a conversation with his family, friends or anyone he met, he would always say and his family expected him to say, “I AM MOSES.” Not a single special occasion went by without him singing to his wife the Marvin Sapp song “Never Could Have Made It”. Moses believed in family and his strongest desire, which he would remind us at every occasion, was that his family should stay together after he and his wife were deceased. Moses was also preceded in death by his son- in- law Wilbur Hightower. He leaves to mourn three daughters, Deborah Hightower, Monique Mabry (Henry), Arrie White (Kenneth); son, Vernon Johnson (Genny); grandchildren, Alexis Hightower, Mechelle Fears (Thornton II), Sharrie Edwards (Patrick), Victor Dozier Jr., Kristie Hightower, Shonda Hightower, Monica Brown (Andre), Geisha Shannon, Omar Hightower, Tosha Jarrett, Toya Andrews, Pamela Howard, Daniel Stephens; great-grandchildren, Omari Weems, Carrington Fears, Thornton Fears III, Ormarian Dozier, Arriel Dozier, Dionna Stephens; nephews, Cedric Johnson (Sandra), Martin Fields, Clifford Johnson, Phillip Scarborough, Mark Scarborough (Belinda), Wesley Allen (Radiah), Michael Grissom(Susan); nieces, Jean Lewis (Rogers), Moy West, Peggy Dorsey; sister in law, Willie Johnson; close friend, Rev. Robert Manley and a host of great nieces and nephews, friends and family in love. We are forever grateful to Tammy Williams who lovingly and devotedly cared for our loved one this last year of his life.

Send flowers to the service of Mr. Moses Jerome Johnson