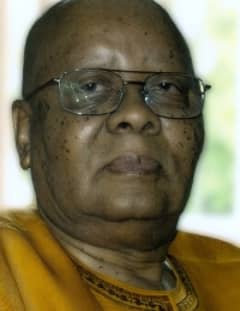 Celebration of Life will be Wednesday, October 2, 2019 10:00am at Grissom-Clark Eastlake Chapel. Visitation will be Tuesday, October 1, 2019 12-6pm. Interment: Georgia National Cemetery.

Rufenus “Smitty” Smith, 85, departed this life for his heavenly home on September 24, 2019 He was born on June 30, 1934 in Reidsville, Georgia to the late Delia Smith Harris and Douglas “Bud” Smith. He was preceded in death by his parents and Stepfather Grady Harris. Sisters Joyce Johnson, Margie Johnson, Earline Harris Howard and his older brother Otis Smith. He graduated from Tattnall Industrial High School located in unincorporated Tattnall, Georgia. After graduation, he enlisted in the United States Air Force. He retired from the Air Force after twenty years of service with an Honorable Discharge. Whenever he talked of his years of service his entire demeanor changed – becoming animated and delighted especially when he met another veteran. Smitty was not a talker but he would talk for hours about the military. His response to cruise travel was, “I spent too many days on a ship traveling to my duty stations”. He was also not a fan of long airplane rides he preferred driving. His favorite hobby in retirement was bowling. He entered many tournaments and won numerous trophies, including cash prizes. He also enjoyed playing Bid Whist and was a very competitive. He would lose his low key, calm demeanor while playing.

Send flowers to the service of Mr. Rufenus Smith