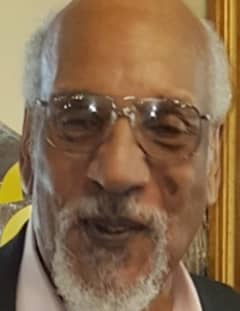 Virgil David Anthony Blake, Jr. was born on March 12, 1936 in Gainesville, Hall County, Georgia to Virgil and Aivnoia (Force) Blake. He was the youngest of six children and was proud to proclaim that he was “the baby.” Virgil, to his parents and siblings, was reared in St. John’s Baptist Church in Gainesville, and was educated at Fair Street School. He always spoke of the importance of family and was full of fond stories of each of his family members, including aunts, uncles, cousins, nieces and nephews. He spoke of his teachers and his sister Virginia, whom he identified as his first teacher as they played schoolhouse. Virgil, or David, as he was known to most outside of his family, attended Clark College (Clark Atlanta University) in Atlanta. While there, he met Alyce Marian Rabb. They were joined in Holy Matrimony at Central in 1958 and celebrated their 60th anniversary as husband and wife on May 4, 2018. This union was blessed with two sons, Darryl Anthony and Bryan David, who were raised in faith, discipline and love. David was drafted into the US Army in 1961 and served as a Specialist 4 in New York. After his discharge Jan 1963, he had Alyce and Darryl join him in New York. In 1964 Bryan David joined the family. David began teaching at Mt. Vernon High School in Mt. Vernon, N.Y. His career advanced to becoming an Assistant Principal at Isaac E. Young JHS in New Rochelle, NY and retiring from New Rochelle HS as a House Principal. “Mr. Blake” loved teaching and his students, and they him, as is shown in that this many years later, many of his students from Mt. Vernon remained in constant contact with him. During his years in New York, David continued his education, receiving his Master’s Degree from New York University in 1974. David always loved music, playing in Clark College’s Marching Band as well as in various R&B groups during his college years. While in New York he continued his love affair with music, writing, composing and producing numerous songs individually and through collaborations with many others. His song writings range from R&B to Pop to Blues and Gospel. He had many songs played on radio stations nationwide and performed live. David wrote plays, including “Before the Flood”, which told the story of Noah from the animals’ point of view. Upon returning to Atlanta, he worked for the Atlanta Board of Education, teaching at George, Turner and Mays high schools as well as Price Middle School. He wrote compositions for the 1996 Olympics, including Hello, Hello (We Are Children of the World), which was performed during the Olympic Flag raising ceremony. He invented board games known as BLACO, which were educational games played like Bingo while teaching the players Black History. After retiring from education in 1998, David embarked on a writing project from which came “Kwamia”, his first published novel. Through the years David continued to write songs and manuscripts individually and through collaborations. His songs had their most success overseas. He continued to educate, always keeping abreast of all current and social events and sharing his life’s observations with his progeny. Pop (Pop Pop/Papa to his grand and great grandchildren) held many generations mesmerized by his knowledge of history and ability to relate the past to the present. After a lifetime best described as one of love of family, education and creativity, on September 12, 2018, Virgil D. Blake, Jr. went to rejoin his playmates (siblings), as he had told us was his wish. He was preceded in death by his parents and siblings, Geneva Blake Samuels, Walter James, Aivnoia (AV) Lindsey, William Thomas and Virginia Hunter. He is survived by his wife, Alyce; sons, Darryl (Rose) and B. David; grandsons - Antoine and Darryl Jr.; granddaughters – Alexandria, Deanna, Adryanna, Arielle and Bryanna; great-granddaughters Brookelyne and Baylee; brother-in-law, John Samuels; and a host of nieces and nephews.

Send flowers to the service of Mr. Virgil D. Blake