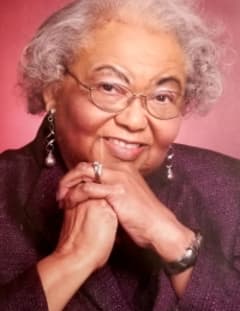 Alyce Marian Rabb was born to Alma Inez and Charles Theodore Rabb on February 19, 1935, the first of their two daughters. She was followed by her sister, (Muriel) Jacqueline Rabb, the following year. Alyce Marian, as she was primarily called by family, was raised in Central United Methodist Church, and educated in the Atlanta Public School System, graduating from Booker T. Washington High School in 1953. She attended Clark College, now known as Clark Atlanta University, where she met (Virgil) David Blake. After graduating from Clark College, they were married at Central in 1958. In 1959, the couple was blessed with the addition of their first son, Darryl Anthony. David was drafted into the United States Army in 1960 and stationed in New York. Upon his discharge, David sent for his wife and son to join him in New York, where the family grew with the addition of the couple’s second son, Bryan David, in 1964. The family remained in New York until 1979. During that time, Alyce was a homemaker. She made sure her children were raised “right”. Alyce and her sons visited Atlanta virtually every summer, spending that time mainly with her parents, sister, grandmothers, niece and nephews. Upon her permanent return to Georgia, Alyce resumed her attendance and service to the Lord at Central, ushering and working with the Sunday School. She worked briefly with Massachusetts Mutual Insurance company before resuming her main role as homemaker and caregiver for her family. She cared for her parents in their later days, ensuring they would remain at home. Her love for her grandchildren was always obvious, as she spent the rest of her days caring for and being proud of her grandchildren. She soaked up all of the love they gave to “Ma Ma”. She was showered with love from all of her relatives and always looked forward to their calls and visits. Alyce Marian Blake left this life on the afternoon of Saturday, November 30, 2019, in the company of her family, who were gathered to enjoy the day with Ma Ma. Unbeknownst to them, she and her Heavenly Father had plans to spend eternity together, beginning on that afternoon. Other than minor pains, she spent her last days giving love to family and friends, as she had done all of her days. She spent Thanksgiving weekend with her family, finally easing into eternal rest while napping in front of her family. Alyce Marian Blake was preceded in death by her sister, Muriel Jacqueline, her parents, Alma Inez and Charles T. Rabb, and her husband, Virgil D. Blake, Jr. She leaves to praise God for her time with us in this life, two sons, Darryl Anthony and Bryan David, her heaven sent daughter (in law), Rose, two grandsons, Antoine and Darryl (Bridgette), five granddaughters, Alexandria, Deanna, Adryanna, Arielle and Bryanna, two great grandchildren, Brookelyne and Baylee, a host of cousins, nieces and nephews, and very, very close friends whom she always considered family. Grissom-Clark Funeral Home.

Send flowers to the service of Mrs. Alyce Blake