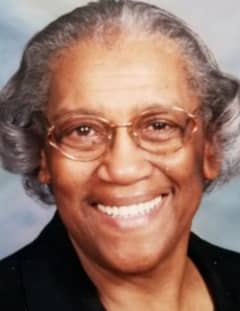 She was righteous. She loved to laugh and sing. She learned to use a computer and a cell phone in her late 80’s. She wrote poetry. She celebrated your achievements, consoled and encouraged you if you’d failed. She was witty, always prepared with a response that would stop you in your tracks and make you laugh. The only thing she apparently regretted was not continuing her early training to be a pianist; in her inimitable way, however, rather than choose silence, she plunked away on her keyboard and accompanied herself. She saw every episode of Law and Order at least three times. Her major complaint was arthritis, which she called “Arthur,” that devil of pain and stiffness that lived in her knees. She loved to read, especially her Bible, and she had a passion for crossword puzzles. People were drawn to her like children to ice cream trucks, like butterflies to flowers. It’s rumored that everyone she met ended up loving her, and if that isn’t true it should be. Bessie Lee Perry is her name, and she entered this world in 1923 on an ice cold first day of the year in Americus, Georgia. A New Year’s baby, the only living child of Sidney and Carrie Draines (a sibling, Ellen, had died at an early age; a beloved half- sister, Daisy, the child of Carrie’s first marriage, was ten years old at the time). Later the Draines family moved from Americus to Montezuma, a small, segregated town in southwest Georgia, where Bessie recalled buying Coca-Cola through a window at the back of a general store and walking past fields where black people bent to pick cotton. In 1936, Carrie, Bessie and Daisy moved to Newark, New Jersey, (Sidney came later), where Bessie continued her education and graduated from Southside High School in 1941. In 1943 she wed her one true love, Henry Grey Perry; the marriage spanned 54 years. In the beginning, the couple lived in New York City where Bessie found employment as a secretary and Henry worked in a factory supporting the war effort. In 1948, when their oldest child was four, the Perry’s moved to Monticello, New York, where Henry found work in the food industry developing skills that resulted eventually in his becoming an executive chef. The family rented a comfortable second floor apartment in Mother Martha Finn’s house on Spring Street. Mother Finn was the pastor of Bethlehem Temple; little did the couple know how profoundly this church would affect their lives. Shortly after Bessie began attending the church, Henry and she were baptized in Jesus’ name and received the Holy Ghost. Over the next ten years the couple had seven more children. In 1959 they moved to Hurley, New York where, until 1985, Henry, now a District Elder, pastored a namesake Bethlehem Temple in nearby Kingston. During a portion of those years, Bessie worked in Woodstock, NY, for a company that made cooling devices for the military. In 1975, Bessie’s parents, Sidney and Carrie, moved in with the family after Carrie suffered a stroke. Carrie passed in 1985. Sidney migrated with his daughter and son-in law to Louisville, KY, where they worshipped at Christ Temple Apostolic Church. Sidney died in 1985; Henry followed in 1997. Bessie, active in her church, lived alone until 2005 when she moved to her daughter, Diane’s, home in Atlanta, GA. In Atlanta she attended World Changers Church International, both at the Dome (when she could attend), and electronically, (when her mobility became restricted). In May 2018, Bessie became critically ill. The family secured in-home hospice services and hired appropriate caregivers, making it possible for Bessie to depart this life on July 10, 2018 in the comfort of her home and the presence of her daughters, Debra and Diane. She leaves behind eight children: Richard Henry Perry, Mark Anthony Perry, Michael Perry, Debra Perry, Jonathan Perry, Aaron Bernard Perry, Diane Perry and Samuel Perry; eight grandchildren: Alison Wright Perry, Andre Mark Perry, Grace Louise Perry, Jonathan Aaron Perry, Malcolm Kalen Perry, Jaren Armand Perry, Jordan Sade Perry and Jade Whitney Sloan Perry; two great grandchildren: Oliver David Perry and Sloan Zoe Perry, three daughters-in-law: Janice Ramocinski, Gretta Perry, and Maria Perry, a son-in-law, Calvin Duncan, and a host of nieces, nephews, cousins, foster children, foster grandchildren, friends, neighbors and acquaintances. We celebrate Bessie Perry’s life and example. We will keep her alive in our memories forever.

Send flowers to the service of Mrs. Bessie Lee Perry