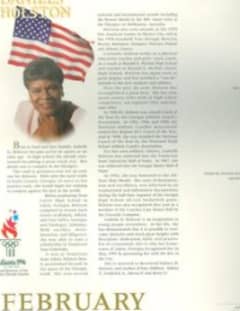 With sacrifice, determination and diligence, Isabelle was able to earn a track scholarship to Tennessee State University in Nashville, Tennessee with Coach Edward Temple as her track coach. There she won several national and international awards including a Bronze medal in the 4x100 meter relay during the 1956 Olympic Games in Melbourne, Australia. She won awards at the 1955 Pan American Games in Mexico City, Mexico. She won awards at the 1959 Pan American Games in Chicago, Illinois and the Goodwill Tours where she ran in Moscow, Russia, Budapest, Hungary, Warsaw, Poland and Athens, Greece. She made all American from 1955-1959 in track and field. She was the first Tigerbelle in history to qualify and win 4th place in the 100 meters finals of the 1956 Olympics. She held records in the 60 meters, 50 yard dash, 100 meters, 100 yard dash, and the 220 yard dash.

As a Physical Education teacher and Girls Track coach in Dekalb County, Isabelle made outstanding accomplishments as a coach for 37 years. Her track team won seven county titles, ten regional titles and four state titles during her coaching career.

In 1982-1983, Isabelle was named Coach of the Year by the Georgia Athletic Coachs Association. She was also awarded Regional III National Coach of the Year by the National High School Athletic Coaches Association in 1983, 1985, and 1990. In 1992, she was honored as the All-Star Role-Model during a Georgia High School All-Star Basketball game. Within the same year, Isabelle was added to the Coaches Care Honor Roll by the Gatorade Company.

She was currently a member of the Decatur/Dekalb Retired Educators Association and the Georgia Retired Educators Association. At the age of 77, Isabelle still participated in various county, state and national track meets for seniors, where she threw the shot put, discus, and sometimes competed in the long jump. A great friend and colleague by the name of Linda Lowery was always there to keep Isabelle moving on the track. Isabelle and Linda were both members of the Atlanta Track Club.

Isabelle was married to the Reverend Dr. Sidney R. Holston, Co-Founder of Church Twinning International, Inc., which is a non-profit ecumenical outreach ministry that joins churches in America with churches in Ghana, West Africa, Jamaica, South Africa, Peru and beyond. Reverend Holston has preached about missions work in various churches in the southeastern part of the United States which included churches such as Dexter Avenue King Memorial Baptist Church where the late Reverend Dr. Martin Luther King, Jr., formerly pastored. He has also preached in Ghana, West Africa at Calvary Methodist Church in Accra, Ghana. The late Dr. Andrew C. Denteh, from Ghana, West Africa, was author and co-founder of Church Twinning International. Isabelle and Sidney have four children, seven grandchildren, and one great-grandson. They live in Decatur, Georgia.

Send flowers to the service of Mrs. Isabelle Daniels Holston