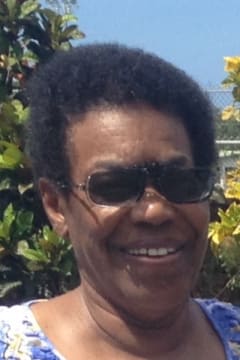 In profound sorrow we announce the passing of Mrs. Jennifer Mahon. Final arrangements are incomplete and will be announced later. Grissom-Clark Funeral Home 404-373-3191. Celebration of Life will be Thursday, December 24, 2020 1:00 pm at Grissom-Clark Eastlake Chapel. Viewing will be Thursday, December 24, 2020 at 11:00am until the hour of service.

Jennifer Ruth Allyson Mahon ( nee Phillip), was born on October 30 1949 at Port-of- Spain General Hospital, on the island of Trinidad, West Indies to Lucille (nee Williams) and John Phillip (deceased). She is predeceased by her parents, brother Tony, maternal and paternal grandparents. Having come from an Indo/African family, Jennifer was blessed with a large extended family consisting of multiple races- African, Indian, dougla (mixed Indian/African), light skinned (Lynette), lol. Our great grandparents (Indian) came from the hills of Calcutta (Mom) and our grandparents from St. Vincent (Dad). Jennifer grew up in St. James at the family house surrounded by her grandmother Eris in the front, with our house in the back and our cousins on one side and across the street. Growing up, Jennifer was a quiet child, so much that my father used to say to her –“why don’t you join the nunnery, you so quiet”. Daddy called Jennifer Ms. Primp and Proper, always reserved, never one to go outside and play with her siblings and cousins out in the yard. Jennifer preferred to sit and sew, play with her dolls and do more domestically minded things. Jennifer attended St. James Secondary School from 1962 to 1966 where she was known as- “a responsible, trustworthy, eager to learn, polite, loyal, persevering, and had a sense of initiative.” Jennifer was a Girl Scout and represented the school creditably in netball. Jennifer migrated with Mom to New York in 1969/70 along with Tony after Mom had divorced. She settled in New York and began crafting her new life, she attended Pace University with a focus on Accounting/Bookkeeping, and she got married in 1974 to Winfield Mahon and had two daughters Natalie and Nicole who was her beginning and end of every day. Jennifer eventually separated and moved to Atlanta and again began a new journey, in a new state, a new city not at all like Brooklyn, New York, much quieter. She began focusing her energies on establishing a life for the girls after her divorce in 1980. Jennifer worked at Z93 FM during the 80’s and brought home stacks of records that were no longer played or didn’t make the playlist, to this day those 45s,LPs are still in the house and she played them up to her hospitalization. She joined Hillside International Truth Center as a bookkeeper with the kids spending many long hours and days in the church as she worked. She continued her education at DeKalb Technical College in Accounting eventually leaving Hillside and going to work for DeKalb County where she retired in December 2013. Jennifer loved gardening and working around the house, she never missed a moment to go to Lowe’s to do some repairs in the house or in the yard or garden. Jennifer spent many years away from Trinidad but was able to recapture the Trini life when she started going back home frequently after retirement, she became a true Trini again. Enjoying Carnival and SOCA music and all the fruits and foods that was available to her. Her plans for 2020 was to be in Trinidad for Carnival but due to illness that had to change, then came Covid and she could not get back. The plan was for her to get back home for 2021 so she could enjoy the warm sun again but alas it was not to be. Jennifer leaves to cherish her memory Natalie and Nicole (her daughters); Taylor (her beloved granddaughter); sisters, Janet and Avril; brothers, Ansil and Andy; uncle, Michael; aunts, Lynette and Ann; brother in law, Louis; sister in law, Gwen, Carlene and Lextra; nieces Gabrielle, Michelle and LaToya; nephews, Cedric, Rayshaun, Nicholas, Mikael, Mitchel; many great nieces and great nephews, many cousins and many friends.

Send flowers to the service of Mrs. Jennifer Mahon