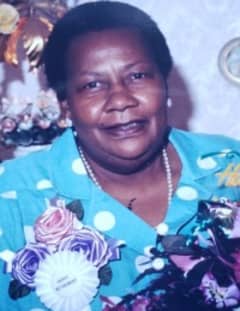 In profound sorrow we announce the passing of Mrs. Mattie Driskell, of Decatur, GA. October 19, 2019 at Emory Midtown Hospital.

A Time to be Born Mattie Kendrick Driskell was born Sunday, June 5, 1927 on Strife Street in Americus, Georgia. Her birth was a blessing to her mother, the late Elmira Kendrick and her father the late James Wright. She was the eldest of her two siblings, Alfred and Amelia.

A Time to Build With the guidance of her parents and the grace of God, Mattie had strong Christian and educational foundations. As a child, she attended Campbell Chapel A.M.E. Church in Americus with her family. It was there that she was baptized in 1933 at five years of age by Reverend Porter. As an adult, she first joined St. Paul A.M.E. Church and later Allen Temple A.M.E. Church both in Atlanta. In 2008, she transferred her membership to New Piney Grove Missionary Baptist Church where she was an active member of the Senior Ministry.

Mattie’s educational journey began at McCoy Hill Elementary in her hometown of Americus, Georgia. While a student at A.S. Staley High School, Mattie was a member of the school chorus. It was during this time that her love of cooking emerged. In her home economics class, she baked the first of many caramel cakes, which became her specialty. The cake turned out so well that instead of serving it to the class, her teacher opted to enter it into a raffle. After high school graduation, Mattie moved to Atlanta where she enrolled at Morris Brown College. While at Morris Brown, she was an active member of the home economics and art clubs. It was during this time that her love for cooking, particularly baking, was refined as a home economics major. Mattie often cited her decision to attend Morris Brown as being rooted in from her mother to pursue higher education and the many members of her home church, Campbell Chapel, and the Americus community who were Morris Brown alumni. During her first year of college, she lived with Americus native Celestine Taylor and her husband renowned surgeon and former Phi Beta Sigma Fraternity International President, Dr. R. A. Billings, who financed her collegiate studies. Mattie was grateful for the investment of her family, church community and others in her education and for the opportunity to pursue a collegiate education during a time when many women, particularly African American women were unable to do so. The effects of this are realized today as she supported and invested in the early and collegiate educations of her children and grandchildren.

After college, Mattie was employed by the Scripto Company for twenty years. In 1977, she decided to return to her first love, home economics and earned catering and dietician certifications. After which she was employed by DeKalb County Public Schools. At the time of her retirement in 1989, she worked at Briarcliff High School in Decatur, Georgia. Rather than slowing her down, retirement brought out Mattie’s entrepreneurial spirit. For the next 10 years, Mattie operated her own catering business. During the late 1980s and 1990s her business flourished. She was frequently name requested by Dr. Johnnetta B. Cole, then president of Spelman College, to cater events for the institution and its major donors, including Bill and Camille Cosby and Oprah Winfrey.

A Time to Love In February 1946 Mattie met Harvey Driskell. The two quickly fell in love and were wedded in holy matrimony on June 3rd of the same year. To their loving union four children, Jeanie Laverne, Betty Joyce, Larry, and Gloria Ann were born.

A Time to Embrace Mattie valued relationships and lived her life in a manner that fully encompassed the words of her favorite scripture found in Mark 12:31 "...Love your neighbor as yourself. There is no commandment greater…”. Mattie’s gift of hospitality has been bestowed upon many, especially her family. In the past 75 years, since she arrived in Atlanta, her home has served as the gateway to Atlanta for many of her cousins and her cousin’s children who stopped by to visit upon their arrival—some for a few hours and others for extended stays as they transitioned to their new lives in the city. Her care and concern also translated into providing child care for family members' children, providing financial assistance and words of encouragement when needed. During annual family reunions and other family events, everyone in the Tripp-Jones family knew that you could always count on Cousin Mattie for a delicious meal and pastries. Her incredible memory and storytelling ability allowed her to share stories related to the family's history that spanned the course of her 92 years of life—many of which most members of the family could not remember or never experienced. Her memory was always a source of fascination to those around her as she could recite the phone number of anyone she knew. She never forgot a birthday and called each family member on their special day to sing the birthday song.

Mattie’s love and compassion for others extended beyond her family. She maintained many deep and abiding friendships several of which originated in early childhood and remained intact until the time of her transition.

A Time for Peace Mattie’s transition to life eternal occurred on October 19, 2019 with an abundance of peace and love that only our Lord and Savior can offer. She was preceded in death by her parents, brother Alfred, her husband Harvey, and daughter Gloria. Mourning but celebrating her life eternal are: two loving daughters, Jeanie Crowell (Dana) of Acworth and Betty Joyce May (Augustin) of Snellville; a devoted son, Larry Driskell of Decatur; eleven grandchildren, Reginald Ealy of Atlanta, Kenneth Ealy (Barbara) of Acworth, Dr. Ashleigh Murriel (Kevin) of Lawrenceville, Antonio Mack (Jacqueline) of Decatur, Matalie Mack of Decatur, Branden May (Brittany) of Ann Arbor, Michigan; Landria Kendrick of Acworth, Precious Crowell of Acworth, Ashley Crowell of Acworth, Bella Crowell of Acworth, and Araya Crowell of Acworth; one sister, Amelia Kendrick of Atlanta; 9 great-grandchildren; 2 great-great grandchildren; a devoted cousin, Marye Katherine Willis of Atlanta; and a host of nieces, nephews, great-nieces, great-nephews, cousins and life-long friends.

Funeral rites Celebrating the Life of Mrs. Mattie Driskell will be 11 am, Saturday, October 26, 2019, at New Piney Grove Missionary Baptist Church. The body will lie in state one hour before the service. Interment Westview Cemetery . Viewing Friday, 12-8PM, at Grissom-Clark Eastlake Chapel

Send flowers to the service of Mrs. Mattie Driskell