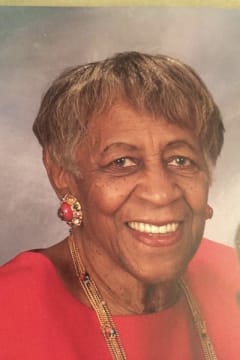 Nannie Ree Grissom Johnson was born on October 23, 1924, in Atlanta, Georgia, to the late Jordan Tilden and Cora Bivins Grissom. Her parents lovingly welcomed their fourth child to join her siblings Josie, Grace and John. Nannie Ree attended Ashby Street School where she was teased by children who called her “Nannie Goat”. Vowing to have her name changed when she became of age, Nannie Ree legally changed her name to Nancy Reecene. So, it was Nancy Reecene Grissom Johnson who went to join her heavenly father on February 14, 2021.

Nancy was a member of the Booker T. Washington High School class of 1942 and the Clark College class of 1950. Without the knowledge of her parents, Nancy and 27 other young people enrolled in the National Youth Administration (N.Y.A.) here in Atlanta. She was in the top of her class, enabling her to continue her training in Seattle Washington.

Her first government job was in the state of California at the McClellan Air Service Command as a Junior Mechanic. While working there, she was given a work study scholarship to the University of Redlands where she then became an Air Craft Mechanic. She was the youngest and the smallest employee for Fort McClellan and San Bernardino Air Service Command.

While in California she met the love of her life, Moses J. Johnson, who was in the Navy. After the war was over, they both returned home to Atlanta and matriculated at Clark College. In 1948, Nancy and Moses were married. To this union four children were born – Deborah, Monique, Arrie and Vernon. Shortly thereafter, Nancy began her career path in life as a Counselor and Board of Directors’ member for Grissom’s Funeral Home. She later worked as a Robinson’s Department Store Model and as a Cannolene Cosmetics Company Hair Model. To ensure the safety of her children and those in her neighborhood, she became a School Crossing Guard and eventually moved on to become a Postal Worker.

While working at the Post Office, Nancy served in many capacities – Counselor, Summer Aid Coordinator, New Employee Instructor and Scheme Instructor. She became the first District Women’s Program Coordinator for the Metropolitan Sectional Center (MSC) and the first Black Women’s Program Coordinator in Atlanta. Nancy was honored by A-Plus Atlanta Chapter during their theme of “Honoring Our Past-Passing the Torch of Success”.

After retirement, she became the owner of Nancy’s Flowers. She was a lover of all sports, but tennis was her true love.

Nancy was a lifetime member of Central and joined at an early age under Rev. J.W. Queen. She was the youngest and is the last of the seventeen members of Central known as “The Storytellers” who came from the old Central Avenue Church on Easter Sunday in 1929 to march into its present location. As a child, she watched her father cook in the concession stands at Washington Park. There she learned to make chili which led to her finding a way to put her cooking to work for Central’s Bereavement Repast ministry. Nancy was always poised, prepared and always pressing forward. She reached out to those around her and encouraged them to be bold and diligent in their endeavors. She lived a bold and colorful life and could often be seen wearing a fabulous hat and fashionable clothes while driving her sharp two-seater, white Crossfire sports car.

She died with love in her heart for her family and friends and left a great legacy of brilliant determination to all who knew her. When God called Nancy home to rest, she gave her fight to the Lord, went in peace and celebrated the ultimate victory in life by going home to the Lord.

We would like to acknowledge Tammy Williams who lovingly and devotedly cared for her in her latter years.

Send flowers to the service of Mrs. Nancy Grissom Johnson