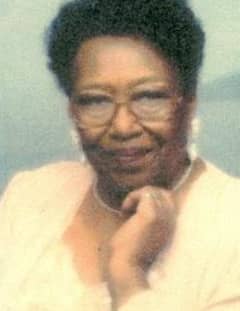 Mrs. Tommie Jean Johnson of Atlanta passed. Tommie Jean Johnson, daughter of the late Willie Johnson and the late Lucille Phifer Johnson Patton, was born March 20, 1931 in Birmingham, Alabama.Tommie was called home by her Heavenly Father to eternal rest on Saturday, November 28, 2015 at 2:28a.m. At an early age, Tommie accepted Christ into her life and experienced most of her spiritual growth as a devoted and committed member of the African Methodist Episcopal church before joining the Presbyterian Church. She remained a loyal and dedicated member of Trinity Presbyterian Church in Decatur, Georgia where she was ordained as a Ruling Elder and served as the Church Treasurer for thirty plus years until her death. Quiet in spirit, but strong infaith, she lived daily by the motto: "All of my help comes from God". She valued God and strived to exemplify love just as God loves each of us. She enjoyed solving challenging mathematical problems, working puzzles, and watching the court shows on television.

Educated in the public schools of Birmingham and Northport, Alabama, Tommie displayed her intellectual gifts early when she was sent to school at age 4 along with her then 6 y ear old brother, Billy Earl because he would not go to school alone. Thinking that they were twins, the teacher never questioned her presence because Tommie was able to keep up with the other children and often exceeded the expectations of a first grader. This would prove to be one of many first and singular moments that would stand out in Tommie's life.

In 1949, Tommie entered into holy matrimony with Raymond Stover and to this union two children were born; Michael and Sandra. Throughout their lives, her children enjoyed the comfort of the constancy of their mother's affection and attention, and her sincere interest in everything that was important to them. Her children were a wonderful mirror of Tommie's intelligence and zest for life.

She completed her undergraduate studies at Stillman College in Tuscaloosa, Alabama where she earned a Bachelor's Degree in Mathematics. Later, she continued her studies at the Emory University earning a Masters of Science in Mathematics. She would begin her teaching career at Elm Street School in Rockmart, Georgia and then on to Fountain High School, in Forest Park, Georgia. Moving on to the Atlanta Public School system; she taught at Price High School, Parks Middle School, Bass High School and finally at Southside Comprehensive High School until her retirement in 1999. While teaching at Parks Middle School and later at Bass High School, Tommie went on to earn her Ed.S Degree in Mathematics at Emory University. From Bass, she transferred to the newly built Southside High School where she was honored, acclaimed, and admirably respected as Chair of the Math Department.

It was at Southside that Tommie wrote and received the highest grant ever awarded to an Atlanta high school. The $1 million grant was awarded by the GE Fund which is the philanthropic foundation of the General Electric Co. The purpose of the grant was to implement a comprehensive program to double the percentage of Southside High School college-bound graduating seniors by 2007. Although she wrote and received many grants for her school and her church, it was the GE grant that etched her name in the walls and halls of evenj high school in Atlanta. Always humble, she was most proud of this accomplishment.

Send flowers to the service of Mrs. Tommie Jean Johnson