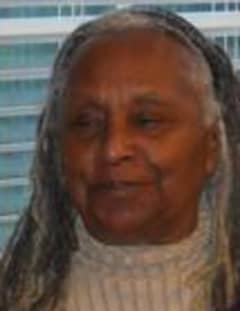 Mrs. Venitia Lenora Watkins Booker, a former small business owner, wife, mother, grandmother, and great-grandmother, departed this life on May 29, 2013. She was born in Helen, West Virginia on November 6, 1923 to Virginia and John Sullivan Watkins. She was an excellent student and loved math. After school, she moved to Greenburg New York, where, in 1950, she met and married the love of her life, Willie Booker, Jr. Venitia and Willie had three children and were married for over 57 years, until Willie went home to glory in January 2008. In addition to always being a busy working mom and wife, she operated housekeeping and catering business before retiring and relocating to Stone Mountain, Georgia to live with her son, Willie, and daughter-in-law, Karen and be a full time grandmother to their three children. Venitia always kept her ties to the North. She would visit her oldest daughter, Luvenia, her grandchildren and great-grandchildren. She loved to sew by making clothes for her daughters as well as curtains to beautify her home. Her greatest joy was being with her children, grandchildren and great-grandchildren. In 2004, her love of the south, took her to Raleigh, North Carolina to live with her youngest daughter, Audrey, and son-in-law, Fletcher Burnette and her two grandchildren, Yomi and Na'eema to further enjoy her retirement years. She attended Wake Chapel Church with the family for over eight years. She is survived by three children, two daughters, Luvenia Baah of New Haven, Connecticut, Audrey Burnette of Raleigh, North Carolina; one son, William Booker of Stone Mountain, Georgia; two sons-in-law, Kwame Baah of Connecticut and Fletcher Burnette of North Carolina; daughter-in-law of Stone Mountain, Karen Booker, eight grandchildren, Won Allen and his wife, Audrey, Shinda DeRosa, Chris Gorley, Maximillion Booker and his wife, Reena, Alexandra Booker, Jocelyn Booker, Yomi Ojo, and Naeema Crosswhite; six great-grand-children, Sitafa Allen, Tyler Allen, Desiree Carter, Kayla Hodde, DAvonni DeRosa and Dmetri DeRosa. Venitia Lenora Watkins Booker was preceded in death by her husband, Willie and sister, Stella.

Send flowers to the service of Venitia L. Booker