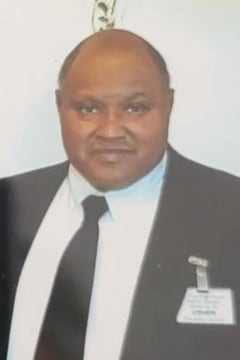 Chauncey Hairston, 63, of Smith Rd., Martinsville, VA transitioned from this earthly life to eternal life on Saturday, May 7, 2022, at his residence. Born in Virginia October 25, 1958, the son of Ezra “Monk” Lee Hairston, Sr., and Laura Martin Hairston, who preceded him in death.

Visitation will be held on Monday, May 16, 2022, at 10:30 a.m. at St. Paul High Street Baptist Church, 401 Fayette St., Martinsville, VA. The funeral service will follow at 11 a.m., with Pastor Matthew Brown, Eulogist. Burial will follow at Carver Memorial Gardens. Viewing will be held on Sunday, May 15, 2022, at Hairston Funeral Home between the hours of 1 p.m. until 5 p.m. In accordance with the CDC, a face covering, and social distancing is required. The family will be receiving friends at the home of his sister Lucille “Cille” Hairston, 412 Armstead Ave., Martinsville, VA. The family ask that when visiting the home that you would please wear a face covering.

Send flowers to the service of Chauncey Hairston

Honor the life of Chauncey Hairston