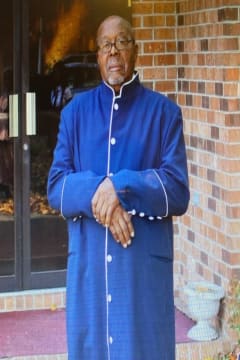 On Sunday, January 9, 2022, God in His Infinite wisdom saw fit to call Dr. Roer J. Morrison, 91, of Chatham Rd., Martinsville, VA to his Heavenly Home. He was born in Pittsylvania County, VA July 26, 1930, the son of Henry Clay Morrison, and Josephine Manns Morrison, both of whom preceded him in death.

In addition to his parents, Dr. Morrison was preceded in death by one daughter, Mildred Morrison; one sister, Zelma Morrison; and four brothers, Billy, William, Harold, and Hassell Morrison.

Dr. Morrison was the oldest pastor in the Martinsville/Henry County area. He was the founder and Pastor of Mount Olivet United Holy Church for over 69 years. He received his education through the Pittsylvania County Public School Systems. He retired from the Martinsville City School System after 24 years of service.

Funeral services will be held on Friday, January 14, 2022, at 12 noon at the C.R.V. Memorial Chapel at Hairston Funeral Home with District Elder Anthony Love, Presiding, and Reverend James Morrison, Eulogist. Burial will follow at Fairhaven Memorial Park, 18960 A.L. Philpott Hwy., Spencer, VA. Viewing will be held on Thursday, January 13, 2022, at Hairston Funeral Home between the hours of 9:30 a.m. until 3 p.m. Then he will lie-in-state at Mt. Olivet Holiness Church, 246 Cabell St., Martinsville, VA, between the hours of 4 p.m. until 8 p.m. In accordance with the CDC, a face covering, and social distancing is required. All other times, the family will be receiving friends at the home of his son and daughter-in-law, Reverend James & Sara Morrison, 1410 Mountain Rd., Martinsville, VA. The family ask that you observe CDC guidelines when visiting the home.

To view live streaming of the funeral service, go to Hairston Funeral Home’s Facebook page, then click on the service.

Send flowers to the service of Dr. Roer J. Morrison