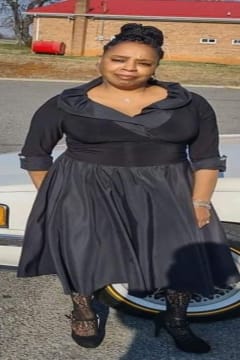 Gail Dodson Hairston, 57, of Dan Wythe Drive, Martinsville, transitioned from this earthly life to eternal life on Monday, April 18, 2022, at her residence. Born in Virginia on June 21, 1964, the daughter of Doris Jones Dodson who preceded her in death.

Gail was a member of New Beginnings Holiness Church, Martinsville, VA. She was a graduate from Martinsville High School class of 1982 and was a PPL provider.

Funeral services will be held on Saturday, April 23, 2022, at 11 a.m. at the C.R.V. Memorial Chapel at Hairston Funeral Home with Pastor Alfred Eccles, Eulogist. Burial will follow at the Preston Family Cemetery, Cameron Road, Martinsville. Viewing will be held on Friday, April 22, 2022, at Hairston Funeral Home between the hours of 1 p.m. until 5 p.m. In accordance with the CDC, a face covering, and social distancing is required.

Send flowers to the service of Gail Dodson Hairston