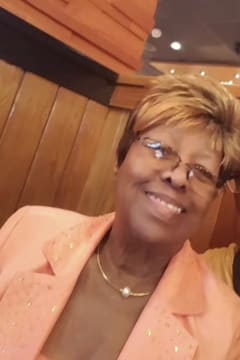 Obituary For Shirley A. Wilson

Shirley A. Wilson, 76, of Berman Dr., Danville, VA, transitioned from this earthly life to eternal life on Friday, April 22, 2022, at Carilion Roanoke Memorial Hospital. Born in Virginia June 17, 1945, she was the daughter of Elder John J. Morrison and Mary F. Leftwich Morrison who preceded her in death.

Shirley was a lifetime member of Evangelical Holiness Church, Axton, VA, where she served with the Senior Choir, the Usher Ministry, and the Kitchen Committee.

Funeral services will be held Wednesday, April 27, 2022, at 12 noon at Evangelical Holiness Church, 17340 Martinsville Hwy, Axton, VA with Elder Marvin Slade, Eulogist. Burial will follow at Danville Memorial Gardens, 510 Church Ave., Danville, VA. Viewing will be held on Tuesday, April 26, 2022, at Hairston Funeral Home between the hours of 1 p.m. until 5 p.m. In accordance with the CDC, a face covering, and social distancing is required. All other times, the family will be receiving friends at the home, 223 Berman Dr., Danville, VA.

Send flowers to the service of Shirley A. Wilson

Honor the life of Shirley A. Wilson