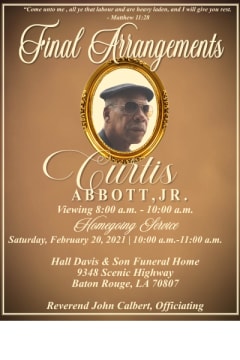 Curtis Abbott, Jr. was born on July 25, 1944 in Independence, LA to the union of the late, Curtis and Thelma Brooks Abbott. He was the fourth of seven children blessed to be born to this couple. He was called from earthly labor to eternal rest on February 13, 2021. Curtis, fondly called “June”, grew up in a small close-knit community surrounded by siblings, cousins, and friends. His warm, pleasant personality made it a pleasure to be in his company. He was skilled in doing or saying something to make someone laugh! June was a product of the Tangipahoa Parish School System. He was a graduate of West Side High School, Class of 1962. While at West Side he was a valued member of the chorus. He will always be remembered for solos that touched your soul and for the contribution he made in his quartets. Curtis accepted Christ at an early age. He joined Mt. Canaan Missionary Baptist Church and was baptized by Rev. D.J. Johnson. He was a choir member and participated in many church activities. His presence “lit-up” family gatherings and brought pleasure to everyone. He will forever be missed by everyone. He leaves to cherish his precious memories: his wife Deloris Jean Abbott; three sons, Darryl Abbott Sr., Cody Abbott, and Brandon J. Abbott; two daughters, Cheryl A. Henry and Cora A. Wise; seven grandchildren, Bianca J. Abbott, Mia J. Abbott, Kelli Abbott, Justice Henry, Darrell Henry, III, Christian Henry, Darryl Abbott, Jr., Nicholas Abbott, Christian Abbott, Courtney Abbott, Colby Abbott, Coran Abbott and NiyJah Abbott; great-grands; two brothers Odell Abbott Sr. of Baton Rouge, LA and Douglas Abbott of Portland, Oregon.; three sisters, Mary A. Dalton, Barbara A. Ringo (Jack) , and Mildred Abbott Harrell of Baton Rouge, LA and a host of close nieces, nephews, cousins and friends. He was preceded in death by his son Adrian, his parents, and a sister, two nephews and two nieces.

Send flowers to the service of Curtis Abbott, Jr.