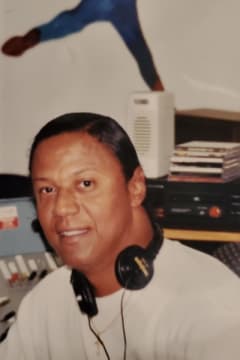 Anthony was born on November 18, 1958 to the late Samuel Evans and Nina Bunkley Thrasher in Athens, GA. He was preceded in death by his loving wife and best friend of 38 years, Patricia Thrasher. He was also preceded in death by sons, Anthony Thrasher Jr. and Bernard Little; brother, Terry Evans; and sister, Joan Wright.

Anthony is a 1978 graduate of Clarke Central High School where his passion for art began. He was a volunteer art instructor for the local recreation department in New Town where he shared his gift to many who are artists today. To this day, his paintings of family and friends still adorn home walls. It was during this time that Anthony began to learn another form of art - Karate. Anthony loved karate so much that he taught several of his neighborhood friends and nephew many of his skills.

Anthony is a veteran of the United States Army. There, he continued his Karate practices during his downtime. Shortly after his departure from the Army, another form of art, music, became his third love. Music would be what he was best known for in his later years.

Gifted with a distinctive voice, a sense of raw honesty, and a passion for music history, Anthony became a successful DJ on WBKZ-880. For many party-goers at local clubs in Athens, DJ ‘Low Down’, was for sure to have you grooving the night away. On his radio show, listeners never had a dull moment. He took us back with James Brown, to juke joint music like ‘Hole in the Wall,’ and even current rap music. Anthony has definitely left a permanent mark on the music and radio scene in Athens.

Funeral services will be held at 1:00 PM, Saturday, September 26, 2020 at the graveside of East Lawn Memorial Cemetery. Public viewing, Friday 2-6 PM, at the funeral home.

Arrangements by Jackson-McWhorter Funeral Home. Sign the guestbook and stream online at www.jacksonmcwhorterfuneralhome.com

Send flowers to the service of Anthony Thrasher