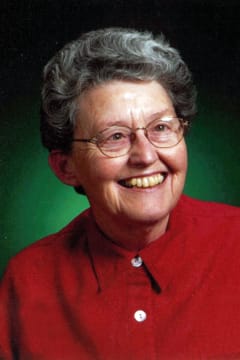 Emma Grace Ismonde was born April 21, 1931 in San Antonio, TX. After her mother, Blanche passed away, Grace and her sister, June, went to live with their grandparents and three aunts about 90 miles away in the small town of Cuero, TX. After graduating from high school, Grace moved to Brownwood, TX, to study elementary education at Howard Payne College (now Howard Payne University). That is where she met Jack Cain, a fellow student from New Mexico. The couple wed in 1950 in Brownwood, where they became parents to sons, Russell in 1951 and Robert in 1953.

The family moved to Louisiana, where Jack later attended seminary school in New Orleans. Grace worked as a bookkeeper to “push hubby through,” as she later wrote with a wink. While in New Orleans, their daughter Ruth was born in 1956.

After Jack earned his degree in divinity, the family had a brief stay at his parents’ ranch near Engle, before moving to Colorado, where Jack served as a pastor. During that time, Grace kept the home and went to summer school to earn the teaching degree she had started 15 years earlier. She taught elementary school in Colorado and in Truth or Consequences, after the family moved back in 1967. Jack and Grace helped with and later took over operating the family ranch following the death of his parents.

In 1969, Jack and Grace rallied other ranch families in the Engle area to hold the first of what would become many years of Vacation Bible School. It also marked the start of what came to be known as the Engle Country Church, which Jack pastored and Grace helped lead in song for the better half of the century. The monthly church services held real spiritual and social value, bringing together area ranchers and visitors who drove out from Truth or Consequences for a down-to-earth sermon often seasoned with humor, hymns set to country music, and fellowship over a plate of potluck food. Jack and Grace also ministered together at the churches in Winston and Hillsboro.

Grace was an active member of PEO, Chamiza CowBelles, the Sierra County Fair Board, and Sierra County Farm & Livestock Bureau. After retiring from teaching, Grace was the first state director of Farm Bureau’s Ag in the Classroom program, which helps schoolkids learn about farming and ranching. For this effort, the New Mexico Women in Agriculture Leadership Conference honored Grace with their “Diamond in the Rough” Award in 2009. Also, for the effort, the New Mexico Farm and Livestock Bureau also honored Grace with the “Distinguished Service to Agriculture” Award in 2016.

In 1978, Grace and Jack chaired a project of the Sierra County Historical Society to compile the history of the county’s places and people. The effort took 18 months, and resulted in a dark green, leather-bound book, copies of which are still enjoyed by many in the county to this day. On the acknowledgement page, Grace and Jack offered their sincere thanks to the community and to a dozen key individuals, adding that, “the satisfaction of having worked with you fine people has only been surpassed by serving the Lord.”

Grace’s family will remember her for being Jack’s rock, a pillar of strength even though she often appeared to be in the background. Grace will be remembered for her unshakeable faith in God; for the humble, loving way she ministered to all who crossed her path; and for how she loved and enjoyed all members of her family: kids, grandkids, great-grandkids, and extended family alike. Friends and family often referred to her as “Amazing Grace” which, when coupled with “I’ll Fly Away,” were among Grace’s favorite songs to sing and play on guitar during church and Vacation Bible School.

Grace referred to Heaven not as her heavenly home, but as her permanent home. “God knows where I need to be… ” she once said while traveling, ”And He’ll get me there.”

A Memorial Service to celebrate Grace’s life, will be held on Saturday, May 8, 2021 at 11:00 A.M. at Vista Memory Gardens Cemetery. Friends and family who wish to honor Grace’s life are encouraged to make a donation in her memory to the First Baptist Church in Truth or Consequences. The family thanks Sierra Hills Assisted Living and Hospice for the wonderful care they gave to Grace.

Send flowers to the service of Emma Grace Cain