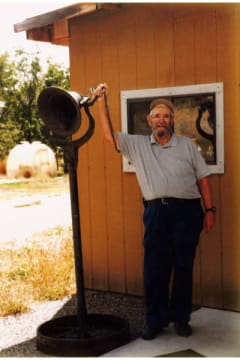 Bill served in the U.S. Navy from February 1951 to February 1955 and was honorably discharged. After serving in the Navy, Bill worked for Boeing Airplane Company in Seattle, WA and worked there from January 1956 and retired April 1989. Bill earned a Washington State teachers certificate and taught Electronic Math and Transistors for Boeing employees.

William enjoyed the outdoors, doing his share of hunting, fishing, and camping while he lived in the Pacific Northwest. He had a lifelong love of learning, always looking for a better way to do things.

After retiring, Bill and Bernice moved to Cuchillo, NM for the high desert sunshine; he was Sierra County Republican Chair and helped elect Gary Johnson governor. He learned all he could about growing pecans and made improvements to his pecan orchard. His orchard was pesticide free. He and Bernice owned Ritch’s Candy Shoppe for 14 years, where Bernice made her own candy, using their fresh pecans.

Together, Bill and Bernice sponsored the Cuchillo Pecan Festival for 18 years, creating a one-day craft show each February, with vendors in the orchard, in the yard, and in the shed. Proceeds were donated to the New Mexico Boys & Girls Ranches of NM.

In their spare time, William and Bernice traveled the U.S. in their RV.

Bill was a member of the American Legion Post 44, Elephant Butte, Cuchillo Negro Community Association, and, for 9-1/2 years as a public member of the New Mexico Board of Pharmacy.

Bill was preceded in death by his 6 siblings: Atha Cossell, Agnes Allbright Ullrich, Alta Gillaspie, and Charles Earl, Jr.; as well as his stepdaughter, Susan Gants.

Send flowers to the service of William "Bill" Frederick Ritch