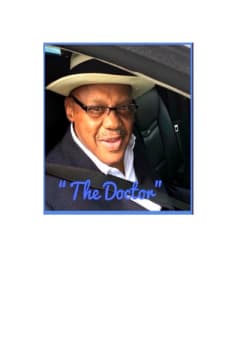 CARL DOUGLAS CLARK, affectionately called “Doc” or “The Doctor” and “Big Daddy” by his grandchildren was the eighth child of ten born to the union of the late Johanna Hines Clark and the late Champ Clark, Sr. on Friday, June 18, 1948 in Harrisburg, Pennsylvania. He was educated in the Harrisburg City School System, a proud John Harris Pioneer and excelled in sports. Before his health declined, he worked as a laborer, Construction worker, Property Management Maintenance Lead and at Janko as a Warehouse Supervisor. As a child, Carl grew up with his siblings attending St. Paul Missionary Baptist Church. Carl was known for his style, he loved to dress, and he was always sharp from head to toe. He loved profiling his tailored made suits, array of hats to match each outfit, adorned with fine jewelry and exquisite shoes. Carl was also known for his sense of humor which he inherited from his dad. If you were anywhere around him, there was always laughter, enough to make you burst your stitches, he was hilarious, he had the jokes, he was a true comedian! Carl thought he was one of the Delphonics, he had the style, the grace, the moves, the swag and he could sing a little bit, nobody couldn’t tell him he wasn’t, except when he was stepping with the Temptations! Carl lived in Kansas City, Missouri for several years and was a loyal Kansas City Chiefs fan, he later relocated back to Harrisburg. He enjoyed watching games together with his sister, Sheila and brother, Buddy’s rival team, the Philadelphia Eagles. Carl endured a long battle with cancer, he fought a good fight and he kept the faith! His daughter, Carla delighted in becoming his primary care giver, she made sure all her Dad’s needs were provided. At times, he could be a difficult patient, but she sustained and made sure he was well taken care of throughout the endurance. She remained fussy about her Daddy! Carl enjoyed hanging out every Saturday with his favorite niece, Tanya Ingram. They shared going out to breakfast to the Broad Street Market, shopping and running errands. Carl enjoyed spending time at family gatherings, especially with his grandchildren. He also enjoyed watching Westerns and Cowboy movies, listening to music, singing and dancing. “Nothing to me but what you see”, “we down and dirty, all the way live!” We always heard of Dimples McGursky and Dave Dovenarsky so much that we thought they were out of town relatives. We never knew that these characters weren’t part of the family; we never saw them, only heard of them through Doc’s fictitious stories. Led by his sister, Donna about three years ago, Carl accepted the Lord Jesus Christ as his personal Savior in the home of his sister, Sheila. Our Heavenly Father, in His infinite wisdom and loving compassion, called our beloved home to glory on Saturday, June 6, 2020 at 5:30 in the morning. His soul winged its’ flight from this world of sin, sickness, sorrow and pain to a place of peace and eternal rest. He was preceded in death not only by his parents, Johanna Hines Clark and Champ Clark, Sr., but also his brothers, Raphael, Sr., Ronald, Sr. and Champ, Jr. and his sister, Elder Karen E. Johnson. Carl leaves to celebrate his life and to cherish their memories of him, his daughters, Carla Brown of Steelton, Pennsylvania and Cheezah Whitley (Aaron) of Independence, Kansas; his sisters, Ethel Jones, Donna Welch, both of Harrisburg, Pennsylvania and Sheila Ingram of Bressler, Pennsylvania; his nine grandchildren, Shane Hollins, Jonnet Hollins, Jaisha Murphy, Caliyah Rice, Breona Francis, Alyssa Whitley, Airin Whitley, Ariyah Whitley and Amani Whitley; his 3 great grandchildren, Amias Quest Morris Hollins, Anaya Mays and Amani Rice; his precious little friends whom he enjoyed talking to on the phone, Kitty, Shue and Harper and a host of other family members and friends. “God dipped me in the water, Heaven got the news and God sealed the order. I left all of my sins, I left all of my sins, down by the riverside. I left cheating, stealing, rogueing, down by the riverside.” Carl’s life was celebrated on Friday, June 12, 2020 in the Sanctuary of Grace Temple Church of The Living God in Steelton, Pennsylvania and was eulogized by his nephew, Reverend Tertius S. Johnson. He was buried in Paxtang Cemetery in Harrisburg, Pennsylvania.

Send flowers to the service of Carl Clark