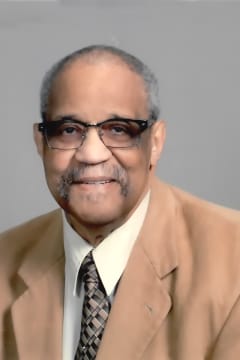 George "Bumpsie" Crummel, 89, of Harrisburg, passed away on Wednesday, September 1, 2021 at the Community General Osteopathic Hospital.

He was born to the union of the late James A. Crummel and the late Margaret Banks Crummel in Harrisburg, Pennsylvania.

He received his formal education in the Harrisburg Public Schools and was a graduate of the former William Penn High School.

“Bumpsie”, as he was affectionately known, entered the United States Army and served our country during the Korean War. After being discharged, he returned to Harrisburg and began his working career with the Commonwealth of Pennsylvania in the Department of Transportation from where he retired as the Director of Inventory Management.

Under the pastorate of the late Reverend William Joseph Winfield, Bumpsie, at a young age, united with the membership of the Monroe Street Church of God, now known as Trinity Church of Harrisburg and has been a lifetime member.

On Wednesday, September 1, 2021 at the Community General Osteopathic Hospital in Harrisburg, Pennsylvania, George H. “Bumpsie” Crummel, at the age of 89 years, 1 month and 18 days, transitioned from this earthly life into eternal life. In addition to his parents, he was preceded in death by his son, Steven Crummel, Sr.; his sister, Lillie Bell Benton and his brothers, James "Junie" Crummel and Larry Crummel. He leaves to celebrate his life; his life partner, Mary "Movis" Goodson; his daughter, Robyn Roberts Yancey; his stepson, Keith Burton; his grandchildren, Steven "JR" Crummel, Mariah Yancey and Kyle Yancey, Sr. and his four great-grandchildren, all of Harrisburg, Pennsylvania as well as a host of nieces, nephews, cousins, other relatives and friends.

George H. “Bumpsie” Crummel’s life will be celebrated on Thursday, September 9 at 11:00 a.m. in the Sanctuary of Trinity Church of Harrisburg, 244 Harris St., Harrisburg with viewing 9:30 until 11:00 a.m. and burial in Paxtang Cemetery. COVID-19 guidelines will be observed with masks and social distancing for all attendees.

Send flowers to the service of George H. "Bumpsie" Crummel