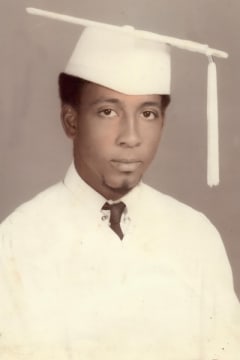 Isaac R. Newsome was born on Monday, December 12, 1949 in the Carol City area of Miami, Florida to the late Mamie L. Newsome, who was known as the “Harriet Tubman” of the Willie Newsome Family. She smuggled and led a large part of the Newsome Family out of New Hebron, Mississippi, where the family after emancipation remained in serious bondage. Ike was the oldest male grandchild of the Willie Newsome Family. He received his formal education in Carol City, where he completed high school. Having the desire to further his education and following his mother’s footsteps, he enrolled in a Nursing Program in Miami to become a Licensed Practical Nurse. Ike, as he was affectionately called, moved to Harrisburg, Pennsylvania as an adult and during his working career, he worked various jobs as a laborer. He was a very private person and also he was a very compassionate man. At a point in his life, he became homeless and spent time on the streets with the homeless, counseling them and providing some information for them to go to agencies who would supply their needs. He fought for others as no one ever fought for him. Ike being reared by a very spiritual woman as his mother was, loved the Lord and had a spiritual relationship with his Savior. On Wednesday, June 10, 2020, Isaac R. Newsome, at the age of 70 years, 5 months and 29 days, transitioned from this earthly life into eternal life at UPMC Harrisburg Hospital in Harrisburg, Pennsylvania. In addition to his mother, he was preceded in death by his sister, Mary Ellen Arzu and leaves to celebrate his life a host of cousins. Isaac’s life was celebrated on Thursday, June 18, 2020 in the Chapel of Major H. Winfield Funeral Home at 11:00 a.m. with a viewing from 10:00 until 11:00 and burial in William Howard Day Cemetery.

Send flowers to the service of Isaac Newsome