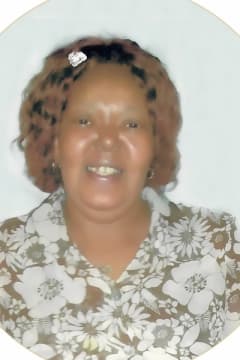 She received her formal education in the Harrisburg School District, graduating from Harrisburg High in 1975. She was smarter than most, able to fully understand and capable of proficiently performing any task at hand.

Jeanette accepted Christ as her Savior and was baptized at an early age at Banks Memorial Church of the Living God. She enjoyed singing in church and is remembered for singing solos, especially “Jesus Loves Me”.

Other memories include; her working for the Commonwealth of Pennsylvania and managing 4 Aces Lounge, formerly Les & Tiny’s for many years and for being a loving daughter, mother, step-mother, sister, aunt and grandmother.

Five months after her 62nd birthday, on Wednesday, June 3, 2020, at UPMC Harrisburg Hospital, God called Jeanette Marie Davis Ross home. Jeanette was preceded in transitioning into eternal life by her mother, Mary Ann Davis; her nephews, Christopher Muniz and Joseph Anthony Muniz; Also Sollie and Emma Butts preceded her in transitioning. Surviving to celebrate her life and legacy and to cherish precious memories of Jeanette are her husband, Jay Ross; her daughters, Jeannette “Tomeka” Marie Askew of Harrisburg, Pennsylvania and Dilisha Denise Gladden of Hampton, Virginia; her stepson, Jayson Ross; her stepdaughter, Angie Ross; her brothers, Eddie Davis and Vincent Butts, all of Harrisburg, Pennsylvania; her sisters, Joyce Ann Muniz of Harrisburg, Pennsylvania,; Edith “Edie” Hill of Hampton, Virginia and Carista Wilson of Harrisburg, Pennsylvania; her six grandchildren; her seven great-grandchildren; her very special friends, Raymond Patterson, and his daughter, Dominique Patterson and an innumerable number of others who called her friend and family.

Send flowers to the service of Jeanette Marie Davis Ross